Remember that awesome wheelchair elevator that I bragged about? Yeah… turns out, it wasn’t all that.

I found a buyer, a wheelchair elevator dealer of sorts, who promised me $1000, sight unseen. He showed up with a helper and a trailer, really, a nice guy. But one look at the lift and his response, “oh, it’s older than I thought, and it’s been painted” and dang it if I couldn’t get it to work. But he said things were slow and wanted to have something for his guys to do so they could make some money. This lift would be a good project. So he generously gave me $200 and proceeded to remove it. Which left me with this: 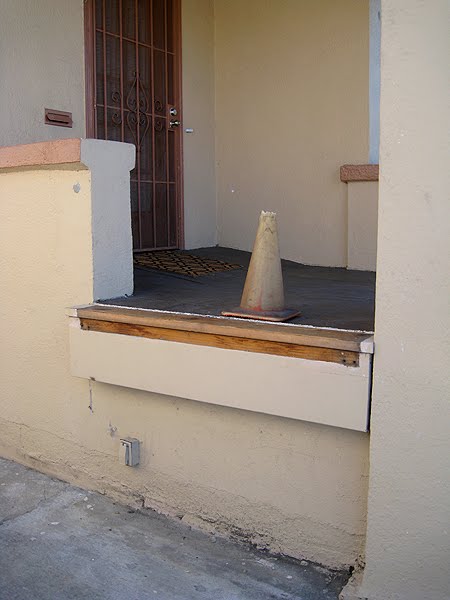 Nice cone right? That’s not dangerous at all, or hideous. So I put it on the When-We-Work-on-the-Front-of-the-House list, which I predicted would be this summer, ha! Weeks turn to months and I had pretty much put this out of my mind. Until it became the neighborhood jungle gym.

My street has lots of kids, under 10, with no where to play. And this open porch wall is awful enticing. Oh, it’s good for games of chase when you run up the stairs, leap off the wall and hope you don’t get tagged. Or practicing skateboard tricks. Or throwing a ball through, which of course slams into the metal security door (equally atrocious) and I think we’re having an earthquake.

I gave a couple half-hearted efforts at letting everyone know I did not approve. I got their names, I know where you live, I said. And once, I think I even managed to scare them! Oh, this does not make me like myself.

We have a quote from Bob to fix the wall, and I hope to do this in the next month or so. But for now, I needed a temporary solution. Plants! I’ve been looking for an excuse to buy horsetail, it’s so modern, grows quickly, makes a great screen. I spent a couple days thinking I’d build a box. Then I got lazy and went to Ikea. I came across these decent galvanized pots and said, that’ll do! I ended up with this: 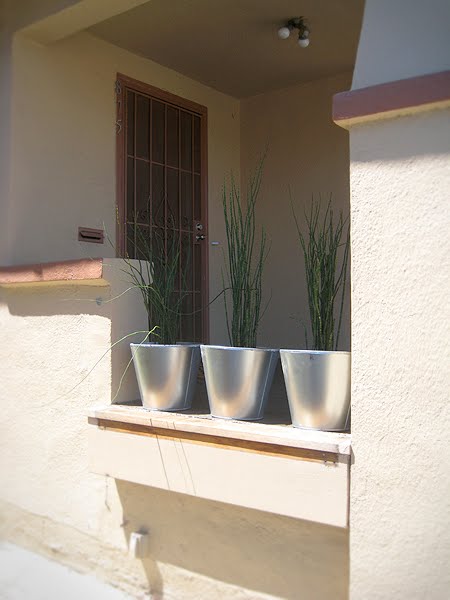 Let’s not even pretend okay? That’s pretty lame. Maybe they’ll fill in quickly? Or better yet, it’s added motivation to get Bob over here and fix this thing. It’s not a bust, I love the pots and the horsetail and have other places for these once it’s all said and done. The best part, it works. Oh, I had a little crowd around me during installation. “What kinds of plants are those?” “Why are you putting that there?” And the little Eddie Haskell of the group, the ring leader, “can I help you lift it, Miss Tonya?”

Oh, I see right through you mister.

Author: tonya
Filed Under: curb appeal, outside
Starting what I can’t finish
CONCRETE JUNGLE ON ITS WAY OUT