THIS DOLLHOUSE OF MINE: BEFORE

Sometime in the 6th grade, I pulled a dusty, primitive dollhouse out of our basement and fell in love. I didn’t know where the house had come from, we just sort of always had it. My siblings and I, we colored on it, shoved junk in there, but never used it for its intended purpose. But something clicked in my 12-year-old mind and I wanted to save it. And while I was saving it, I wanted to create inside a perfect little world all my own.

This newfound interest also coincided with my fledgling babysitting business. Maybe I was feeling the rush of cash-on-hand? Maybe it was because I had started venturing away from my house, across the field to the new strip mall, and wandering the aisles of Michael’s Arts and Crafts? Do you remember when that store was more than scrapbooking? It used to be a mecca of art supplies, crafts, silk flowers and miniatures. Sigh… those were the days. (Subsequently, Michael’s also turned out to be my first real job. At 15. I had to get a work permit. Employee discount! And possibly the occasional five-finger discount too. Hmm…)
Anyway, I remember standing in front of those glass cases filled with furniture and those plastic bags of bric-a-brac, so tiny, fantastic, wonderful, filling an entire aisle. I wanted it all. The drawers that opened, the books with actual pages, the tiny cups and plates…
As I dreamed of my dollhouse, I romanticized the quiet life its inhabitants would lead. I imagined I was creating my own heritage piece, something to pass along to someone, my own daughter maybe, someday. And I began saving and collecting. I remember the $20 porcelain bathroom set was SUCH a splurge, but I justified it by making my own shelving, using a bead for a perfume bottle. The dusty blue couch set, a budget compromise. I outfitted the kitchen in oak, with a drop leaf table (not unlike the one I have now) and fridge that used ice, no electricity. And a pot belly stove. The parents’ bedroom had a four-poster bed I put together myself. And the nursery, the nursery was beautiful. Delicate and white. My mom jumped on my bandwagon and showed me a shop behind The Last Straw Ice Cream Parlour that was just for dollhouses. There I found wallpaper, carpeting and the clapboard siding of my dreams. I used to wander that shop for hours, not always buying something either. I wonder what that counter lady thought of me!
You know, I also wandered antique malls at that age. By myself. In retrospect, is that strange?
So flash forward a quarter century and here I am with a little lady of my own. Full size, not 1:12 scale! And she’s coming up on a third birthday. I give my mom a call and ask her to please, oh please, will you pull that dusty, primitive dollhouse out of your garage and ship it California? And she did. 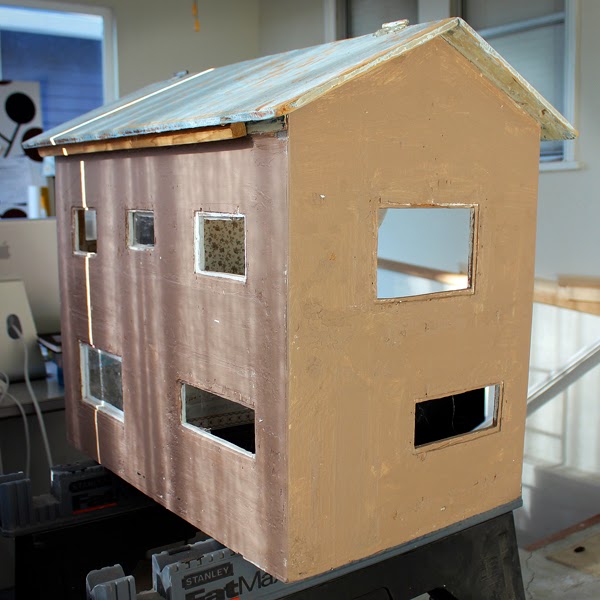 And woah. What many years in a couple different garages of varying temps can do. Gotta admit, I was a little taken aback at the site of the dollhouse I had cherished so much. All of the windows and all of the trim were gone. 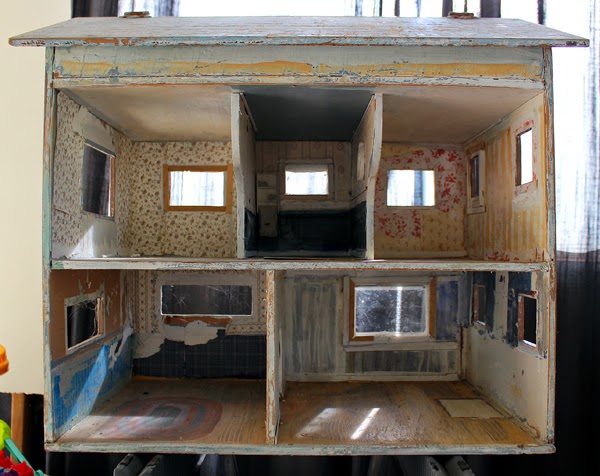 The inside faired much worse and it was looking a bit of a horror show. Not to mention, wobbly as all get out. Was I really going to give this to my daughter? Uh, yes. When faced with a project like this, it’s fuel for my motivational fire. The uglier something is, the prettier I want to make it.
Ugly isn’t enough of a word here. From the top:
Safety was priority number one, so the first thing I did was remove every stray nail and scrape every surface until all was smooth(ish). Then I pulled out some wood glue and my nail gun and restored its rigidity. Solid. 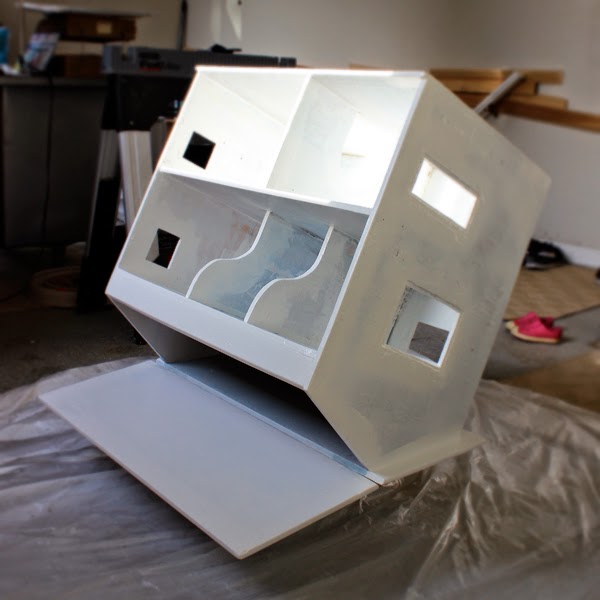 A coat of primer went over every inch, because sometimes, you can’t see what’s there until everything is white. Primer also worked to deter the musty smell of the wood and obviously, stain block.

After the house was smooth, strong and the perfect blank slate, I realized all of the walls, inside and out, were so scuffed and gouged, that paint would not be enough to give it the clean, fresh, 2014 look I was going for. I had already decided on wallpaper for the back walls, but now I knew I would need to wallpaper all of the walls. And the exterior would get all new siding. I wanted to put clapboard on this house SO BAD when I was a kid. It feels full circle to do it now.

Replace windows with acrylic
Add siding on exterior
Wallpaper all the walls
New flooring throughout
Replace trim exterior and interior – around windows and baseboards
Paint the ceilings
Decide on roof treatment (paint or shingles?)
Furnish!

What’s hilarious is I had originally intended this to be a Christmas present and thought I could get all of the above done in a weekend. Ha!!! When reality set in, I decided it was best to save it for her birthday at the end of March. Good idea because I need those entire three months to get this done. Between work, childcare and sourcing materials, this project proved intense. I’ll follow up tomorrow with the process of restoring this little house. It was so much fun, you know, if you like this sort of thing.

Author: tonya
Filed Under: dollhouse
THORA TURNS THREE
THIS DOLLHOUSE OF MINE: DURING

2 thoughts on “THIS DOLLHOUSE OF MINE: BEFORE”