It has occurred to me that perhaps I haven’t been clear concerning the amount of demo which consumes our lives. Maybe you were wondering, why hasn’t this girl picked up a paint brush, done a little decorating, finished off a room? I mean, it’s been 3 months already! The sad fact is, now is not the time. Dust rules the land, so does dry rot. There is no point in painting or putting anything out, for within moments it is covered in a white film of debris. All of my pretties are in boxes, stacked in a back room, feeling neglected. At least Mike managed to pull out his record player and 7 inches yesterday, just to feel normal.

What’s the matter? You still don’t get it? Allow me…

I’m going to start with the basement. Here it is when we moved in, all finished off and divided into three rooms, two closets, a hallway, a bathroom, a garage and a scary room under the porch! 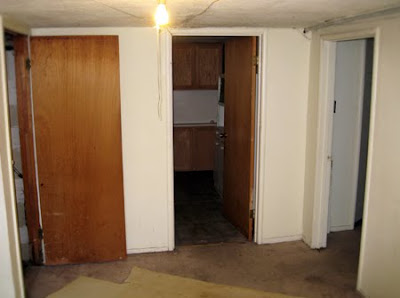 Above is the first room when you come down the stairs, this was sort of a living room. 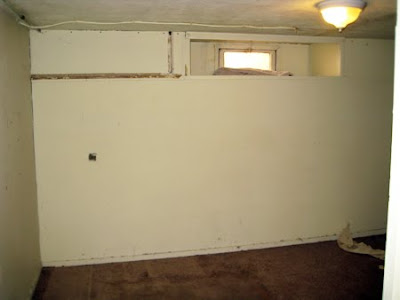 Through the doorway on the right was a bedroom… 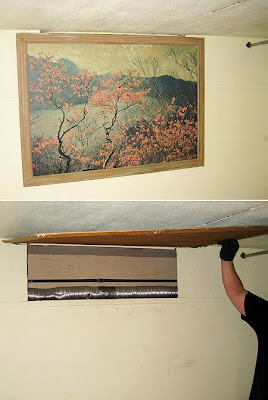 home to a contraption right out of Clue: art disguising access to the dryer vent! 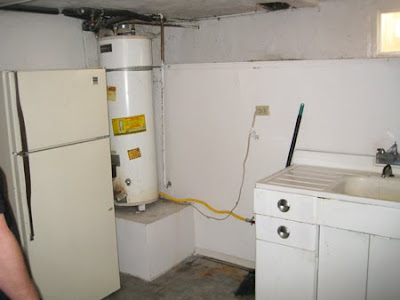 Straight back was the kitchen I’ve mentioned lots before. We’re actually using that fridge right now, temporarily. It’s upstairs in the real kitchen (which will be PART 2). 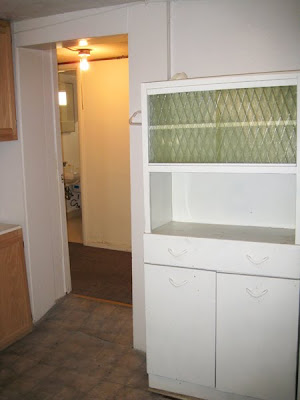 Opposite the sink is a second access to the hallway which leads to the bathroom. We aren’t going there for a veerrry long time. 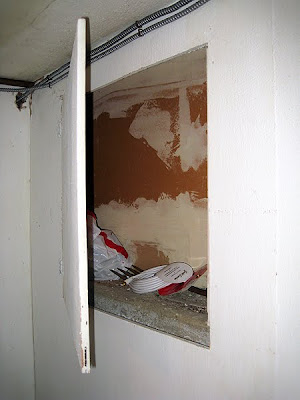 But speaking of the hallway, it holds three cubbies of hidden treasure, mostly in the form of animal feces.

What may or not be evident in all of this is the mess of wires and plumbing criss-crossing every possible surface. We know our seller loved her some tv and telephone because it is in EVERY ROOM of the house. It’s all very haphazard. I call it “reactionary design.”

During our inspections we found out that some of the foundation behind the walls was shedding its parge coat. What the heck’s a parge coat? Well, it’s smooth concrete on top of rough concrete whose purpose is mostly aesthetic. We were told this was normal and not alarming. There was also some evidence of dry rot and termite damage. As you can imagine, with everything closed up like this, it was hard to read. After treating for termites, next up was demo, which leads me to the point of all this: 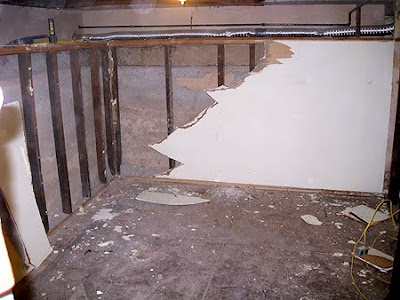 After ripping up flooring (laminate and carpet, egads), Mike tackled the walls. 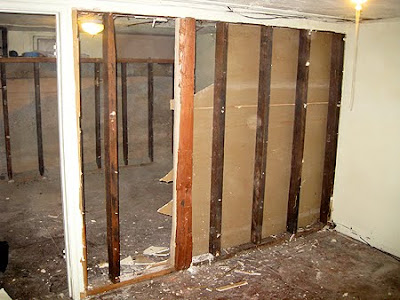 This wall we hope to remove completely but that’s a support beam in the middle (which once was round and had since been shaved to fit inside the drywall!) and the header is the main support for the upstairs. We’ll get creative here, I see pillars for an open look. Eventually this space will be an amazing art studio. 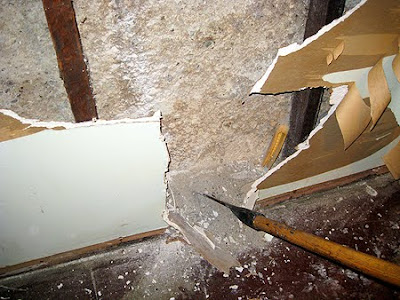 Here’s an example of the parge coat built up behind the wall. I can just imagine the sound of falling sand as it happened over forty plus years. This was pretty much everywhere, on every wall. 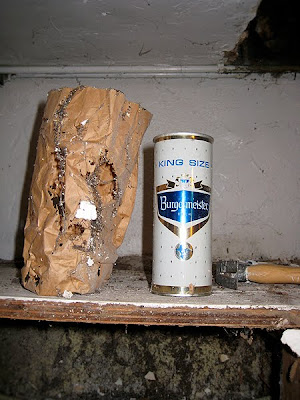 We found artifacts. I’ve never heard of Burgermeister beer but that name is righteous. I also found a newspaper from 1967. Good clue! What we didn’t find, insulation. There is also no heating down here. I’m still shocked someone lived in this space. 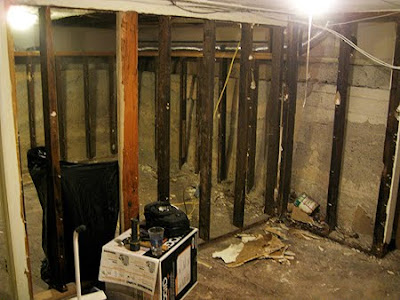 Now that we (well, Mike) got all the drywall, time for the framing. 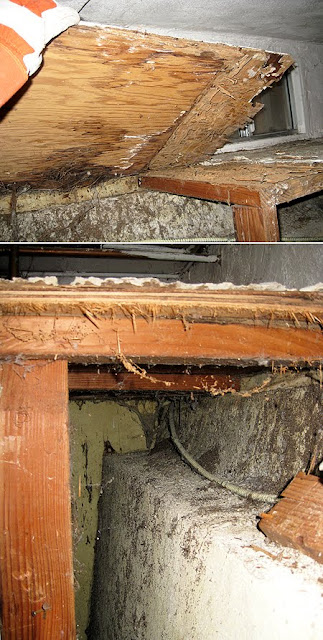 A lot of this was rotten. I have since vowed never to drywall a basement, especially one almost 100 years old. Talk about asking for trouble. 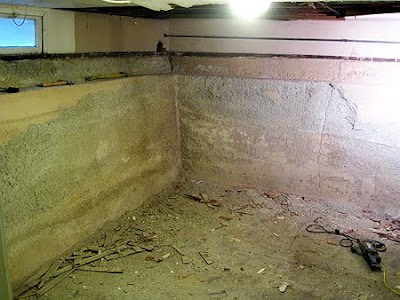 Ahh, this really opens up the space and it feels much less mysterious down here. I was in charge of sweeping up all that dust and I scraped the walls as best I could with a wire brush to remove most of the loose particles. Our goal is to put on a new parge coat and seal it up pretty. 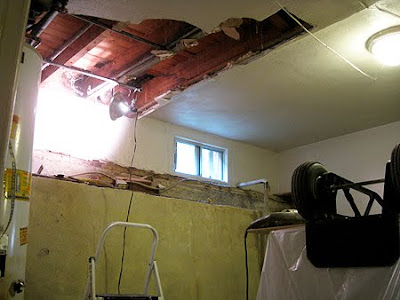 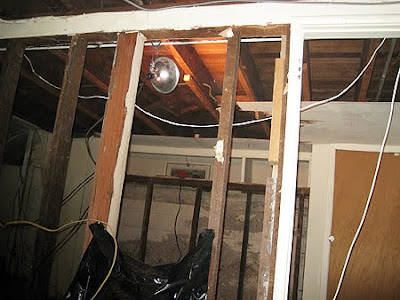 Believe it or not, that was all easy compared to the ceilings. They were covered in plywood attached with MANY NAILS. In fact, we are still tackling this with the hallway yet to do.

At this point, I’ve vacuumed up the dust, dead bugs and cobwebs. We took 4 trips to the dump (more on that later). Now, after this weekend’s great reveal in the laundry room, we need to remove the plywood all along the top of the foundation to see what, if any, 2x4s are rotten. The mudsill is questionable in parts and we revealed rot in some support beams. Time to call in the pros…