VCT IN THE KITCHEN? WORKS FOR ME!

After the drama surrounding the drywall, I needed a simple project. Most people would not say installing flooring is simple, but in all honesty, this was! You may remember that I had found a great deal on wood floors for the kitchen. The contractor came highly recommended, his price was right and I really wanted them. But last minute expenses ate into the budget and even though they were a good deal, we could no longer afford them. I came to this realization on a Tuesday. By Wednesday I had designed and purchased alternate flooring, and resolved to do it myself. 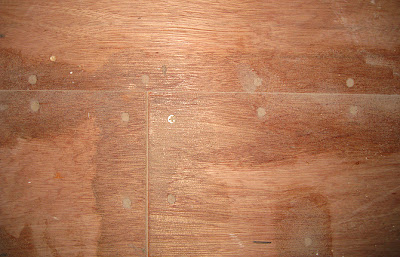 The only aspect of this project I wasn’t comfortable doing was leveling and putting down a subfloor. The folks at the flooring store gave me good direction, Mike and I went shopping for supplies and we called Steve for the labor. We used 1/4″ luan board for the subfloor. Steve installed this using gold screws every four inches at the seams, then every 6 inches across the field. After he was done, Mike spackled all the screws and seams, then gave it a light sanding. 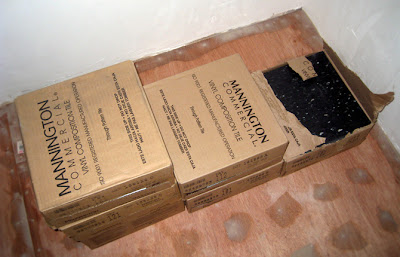 I chose to go with VCT flooring. Is this controversial? Maybe a little too taste-specific, as my realtor might say? Perhaps. It either conjures positive memories of your grade school (as it does for me) or a fear of long hospital corridors. But I think it’s all in the application. It seems to be in the middle of a resurgence for residential use, no longer relegated to 70’s basements, hand-in-hand with dark wood paneling, it’s okay to bring it front and center. And it comes in so many colors!

Side note: I generally hate most tile. It’s too typical, especially what we could afford and with our timeframe. I went to the big box stores and tried to get myself to like something, anything in the porcelain or stone variety. It all said “blah” and “eh” to me. As I walked the aisle, I believe I mumbled these phrases out loud.

We went with Mannington Essentials in three colors; Silver White, Pewter and Night Black. I did a little internet research to define my pattern and was inspired by a basketweave I had found. Once I decided on my pattern, I hit up my digital kitchen floorplan that I had created in InDesign and started laying it out. I wanted to make sure I had the least amount of cutting to do–that the perimeter would be nice and visually even. I think this was a key step in making the process simple. That little printout of my design was critical during layout! 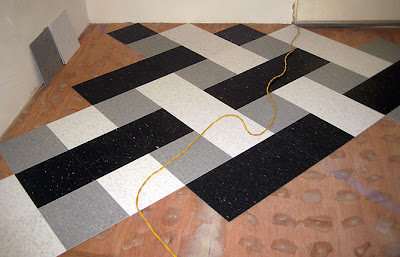 First step was to determine my 45 angle. I used a carpenter’s square in the corner, then snapped a chalk line the length of the room. I used that line to roughly lay out the tiles to make sure they matched my computer drawing, which mine did, I couldn’t believe it! I then chose a single tile as my starter and with a Sharpie I carefully outlined it. You start laying tile in the middle of the room because if you can help it, you don’t want to touch the glue! I stepped on it once and lost a sock. 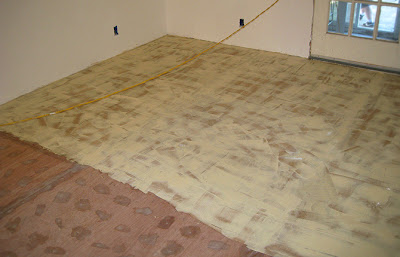 Next is to trowel on the glue, pay attention to manufacturer’s specs. You want to do half of the room at a time, starting in the corner and working toward the middle. Oh crap, I let the extension chord sit on the glue! That was fun to remove I tell you. 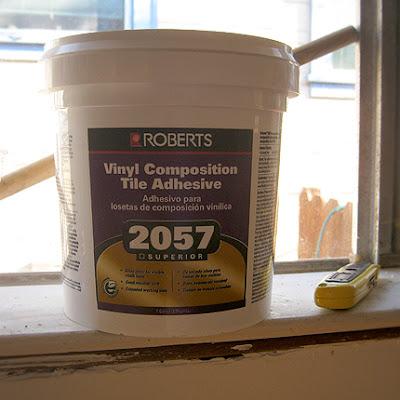 Believe it or not, this glue is nontoxic with no-vocs. I was told it was safe to use while pregnant, but it is some stinky, not to mention sticky, stuff! 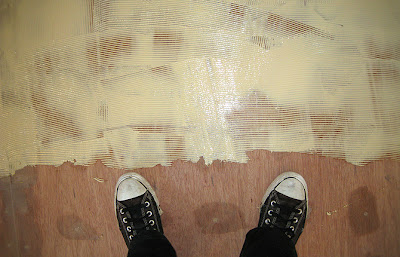 Wait impatiently for glue to dry from yellow to clear, which indicates it’s ready for tile. 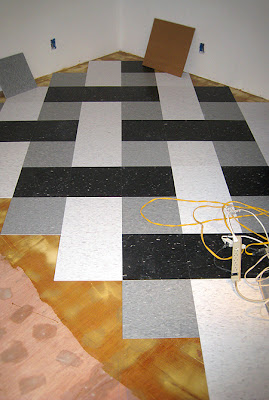 Starting with the outlined tile, carefully start placing tiles, butting them TIGHT. I referenced my printout often to make sure I didn’t screw up the pattern. If you make a mistake and need to take up a tile, it’s really difficult and the tile will break. Growl. This part goes fast and once complete, repeat the process on the other half of the room, then retreat to the couch with a piece of cake. I waited to do the perimeter and any cut tiles the next day, the glue gives you 24 hours to set tile. 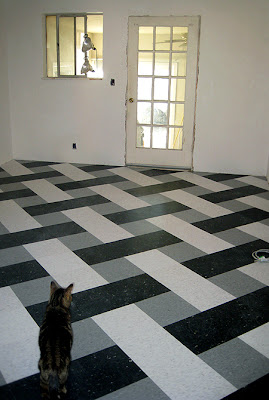 I forgot to take a picture of my template! It was a cardboard contraption that I used to measure my cuts, and made the process fairly uncomplicated. It’s okay if the tiles aren’t tight to the wall since this will eventually be covered with baseboard. The tiles cut easily by scoring with a utility blade, then carefully snapping. Not gonna lie, this was simple but tedious. My fingertips were pretty raw by the end.

Once it’s done, stand back and stare at it. Leave the room then comeback, just to make sure it’s still there. Go ahead, let your cats crawl on it, they will be mesmerized. All that’s left is to wait 24 hours for glue to set, give it a good clean using this, then coat it 3 times with this. Let it dry and you are DONE!

6 thoughts on “VCT IN THE KITCHEN? WORKS FOR ME!”