CATCHING UP » THE BACKYARD

I hate how often I don’t get to post on here. It’s a casualty of our current lifestyle, I suppose. Any time that is not devoted to my child, is devoted to my job. That’s just how it is. Ever since becoming parents, Mike and I both have to squeeze what were 40+ hours/week jobs into 5 hours a day, more or less depending on urgency of deadlines. And lately, I’ve had a lot of deadlines.

As you know, the blog suffers.

But when I get a hot minute to do something I want, and with “what to blog about” floating in the back of mind, I tend to gravitate towards gardening. I do love getting my hands dirty, the fresh air and the gratification of growing things.

When we first moved in to this little house back in 2009, the backyard wasn’t too impressive. In 2010, it got a lot of love (reminisce here, here, here and here). 2011 garnered an infant and the yard was all but forgotten. I don’t remember 2012, I think we mowed once or twice? Anyway, 2013 is the summer we kicked back into high gear. I’ve been a gardening fool. Let’s go left to right, shall we? 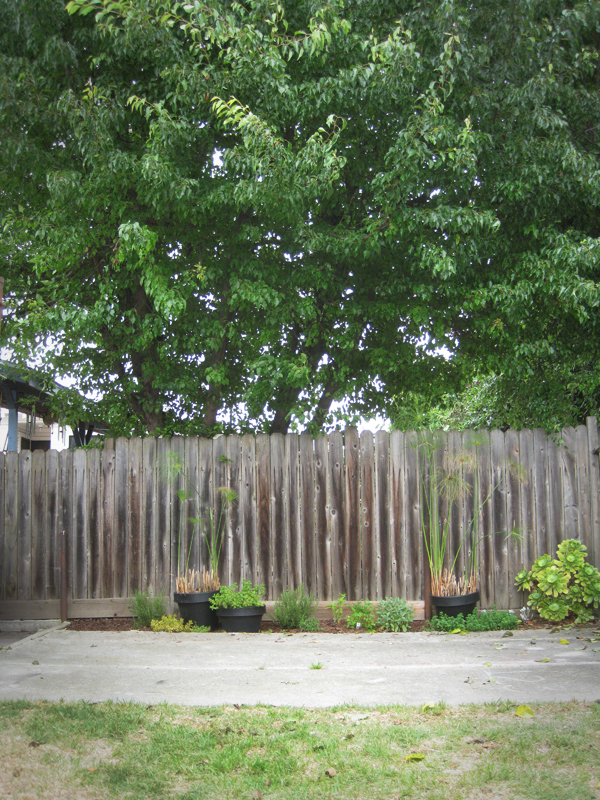 The backyard is a big square, with perimeter gardening beds and one of those metal sheds in the corner. When you come out of the sunroom and look to your left, there is a long herb garden. Take a gander at that giant tree in my neighbor’s yard. I have a love/hate relationship with that monster. I hate it because it is messy with its dropping of the leaves and seeds all the time. I love it because it offers up partial shade and makes a wonderful wistful noise in the wind. (Speaking of shade, our yard actually has three separate climates, something you can really only tell by living in your house for a few years and keeping your eye on the sun. This side only gets late afternoon sun. Bad for Kangaroo Paws. RIP.)

N’ere you mind the grass. I’m in the process of killing that weed factory with hopes of replacing it with soft sod goodness. 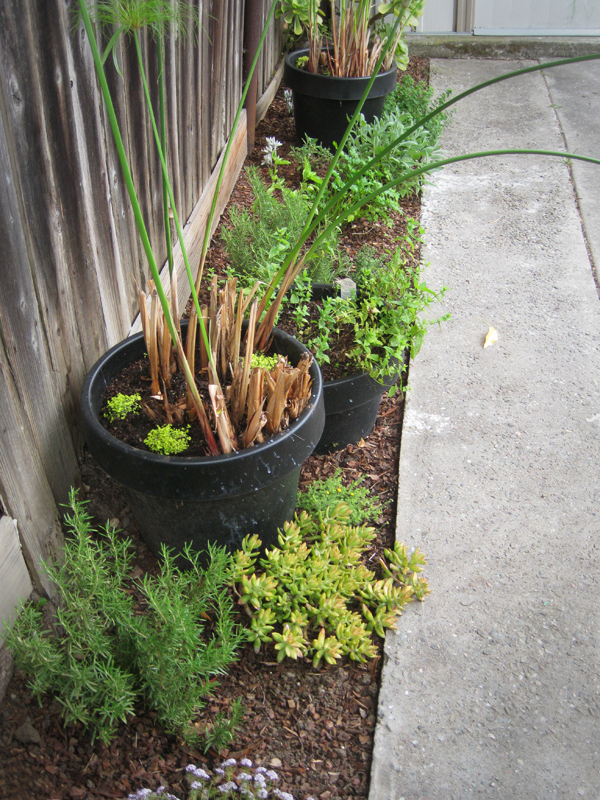 For food, we have two Rosemary bushes, Camomile, Mint (in the black pot, invasive you know), Lemon Thyme, Basil, Parsley, Sage and Oregano.

It’s not all herbs though. I also have some Alyssum and succulents peppered throughout just for looks. The two big pots still hold Papyrus, which I think is just the coolest. Sadly, they aren’t as lush as they used to be. I blame 2011. But they are on a comeback. I added Baby Tears to fill in the pots so the bottom doesn’t look so much like death and neglect. 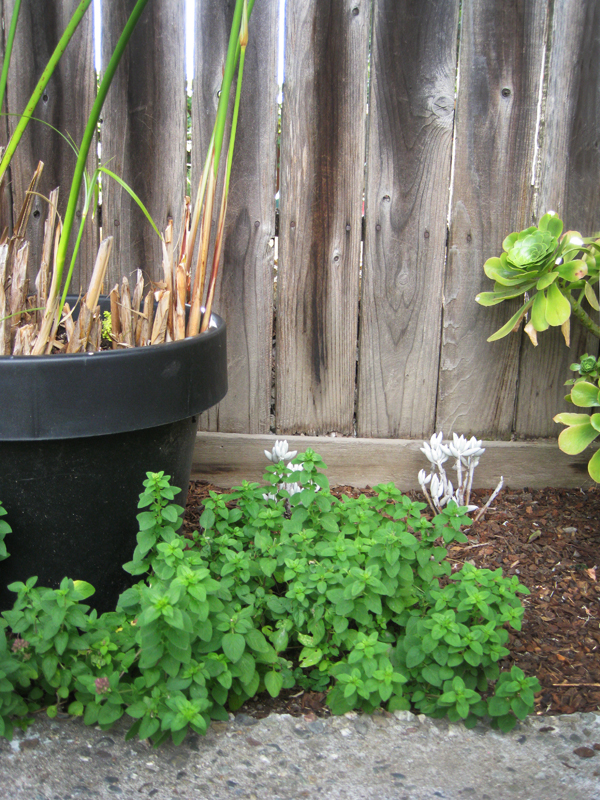 Check out that Oregano! Grew from seeds three years ago. I’m just a little proud. 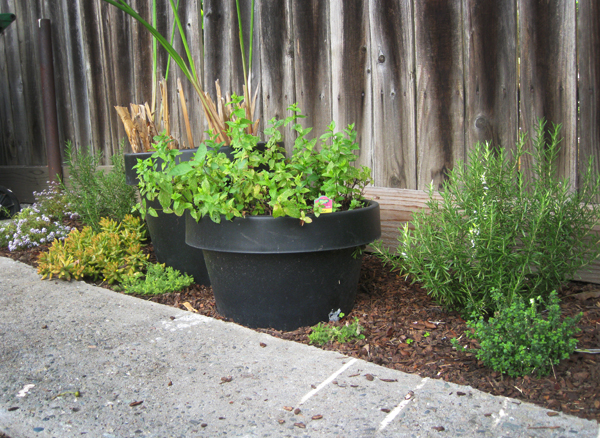 The Mint was from seed too (as was the Sage). I’ve learned with Mint, it can’t get too dry. And even if you aren’t drinking a lot of Mint Juleps, you have to keep it trim otherwise it gets super leggy and just plain ugly. BUT, it is so resilient! Blows my mind. I have hacked this thing to bits and it keeps coming back. I’m impressed by plants like that. 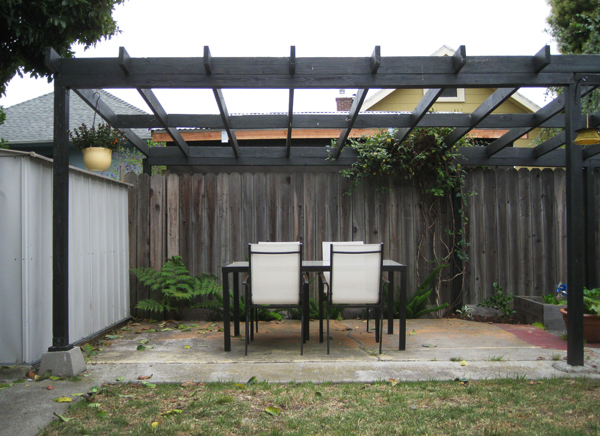 Now look straight ahead and past the ugly yet highly-functional metal shed, here is our eating area. 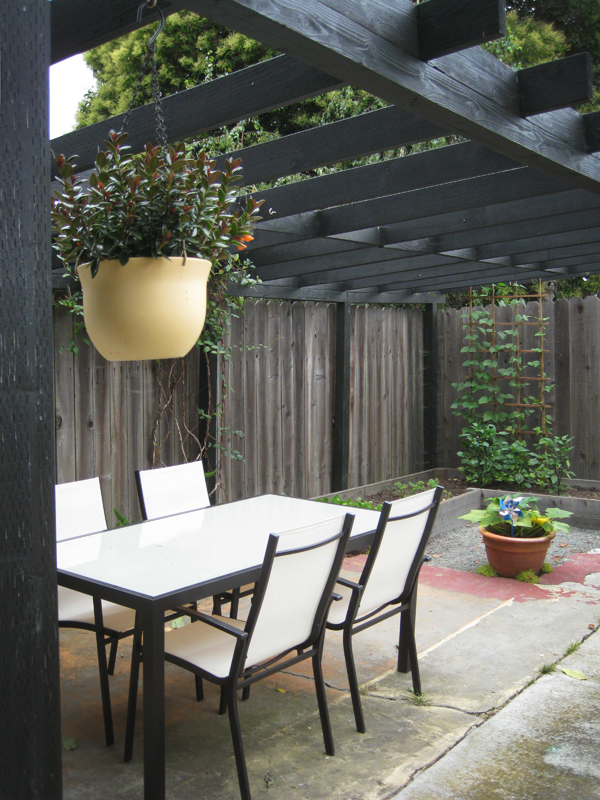 We painted the arbor/trellis/death trap black quite awhile ago and it is starting to show it’s age with a bit of flaking and things. I am not bothered, it still looks good. It’s a spider haven however, man alive! We hit it with a broom quite frequently and that helps hinder the Munster vibe. The Ikea Ammero set still looks brand new despite being left outside all last winter.

Side note: When I watch HGTV and they redo an outdoor space with tons of seating and pillows and trellises and flowing fabric every which-a-way, all I think about: spiders. 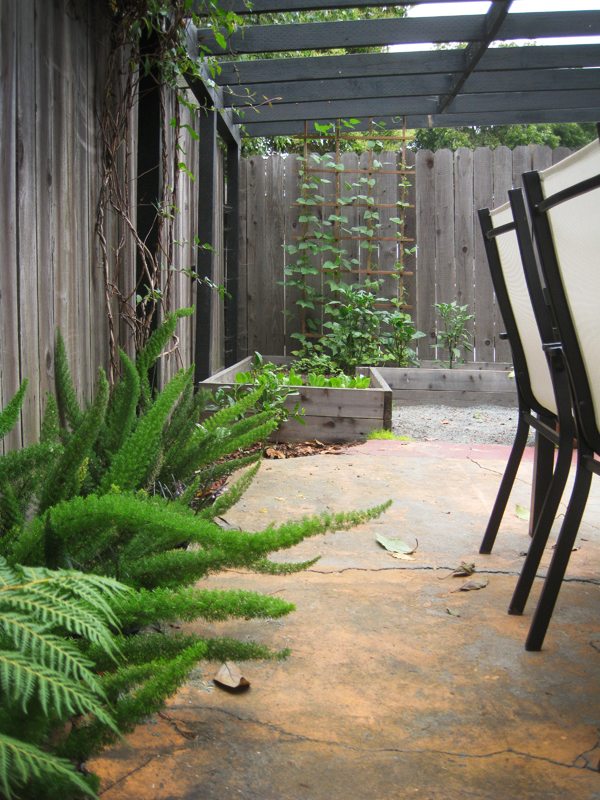 I am so psyched by my Asparagus Ferns and Black Mondo Grass that runs along the fence. What a triumph! This spot is shady all the time and these plants, as well as the larger Fern in the corner, love it here. The way the fingers creep over the edge is exactly the look I wanted. LOVE. You can’t really see in this shot but the Black Mondo Grass has been multiplying and one day should fill all of the gaps. 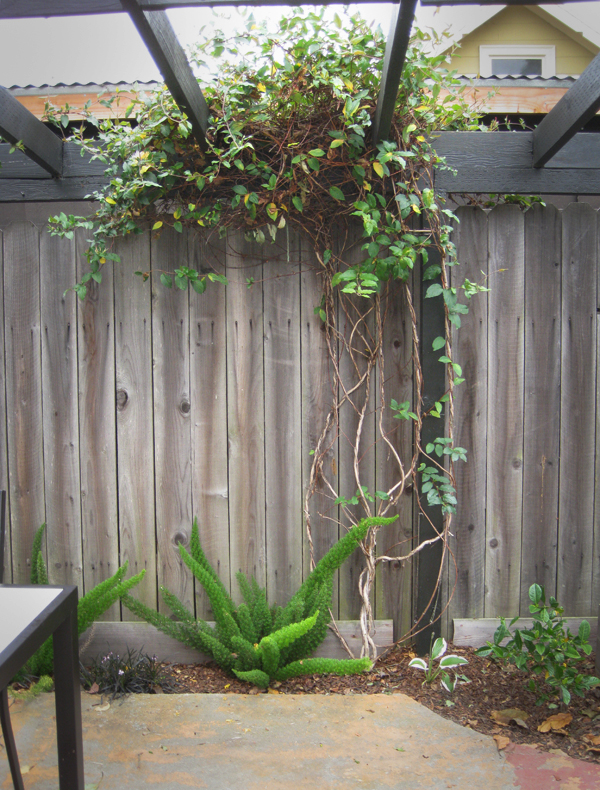 I planted this Jasmine Vine with the hopes of growing it up and to the left. But it is proving really hard to train. Every time I tie back shoots to go the way I want them, it chokes to death. My new strategy is to cut, no more forcing. We’ll see how it goes. And argh, it almost never flowers. It grows like mad during the rainy winter, then the summer threatens to dry it up. I water it all the time. 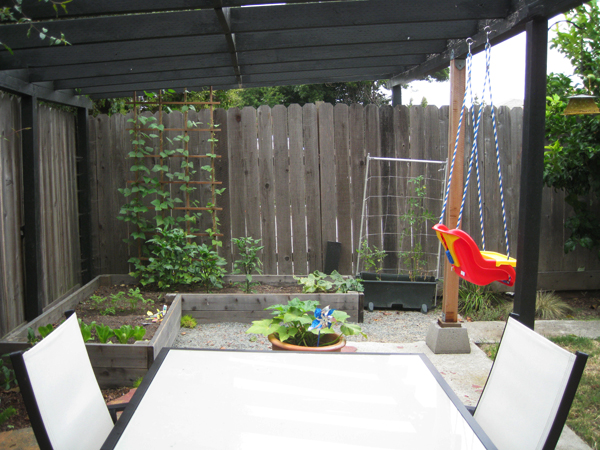 Beyond the dining area is the veggie garden. I built those raised beds myself I did and they have held up fabulously. We also added a swing for Thora and an extra 4×4 beam to support it (which has yet to be painted black). 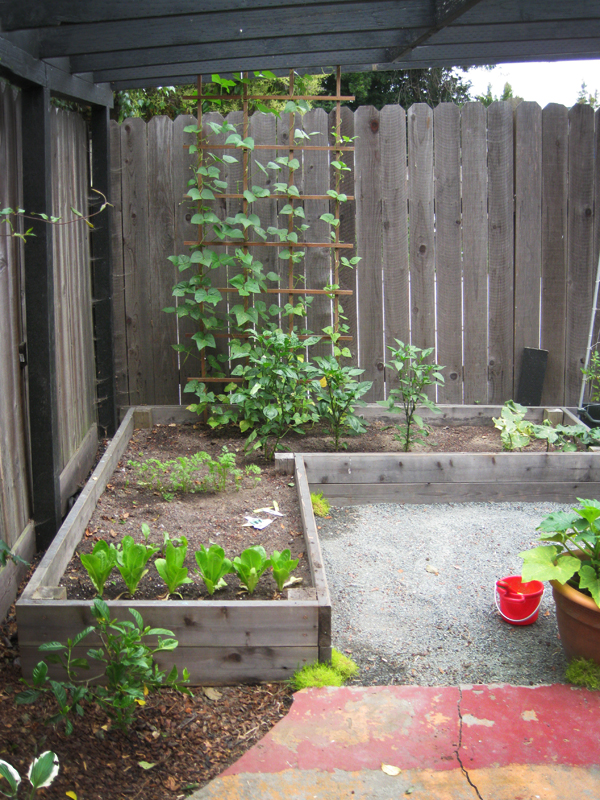 We got a late start in the spring, but everything is doing really well and of course, I’m on it now. Right in front of the bed is a Begonia which has yet to flower and a poor little hosta that is being devoured by an invisible nighttime predator. Hmm. Most of the bed itself gets sun all day long. We have Romaine, Beets, Carrots, two Green Peppers, one Jalapeno, Pole Beans (SO CUTE!) and a cucumber. 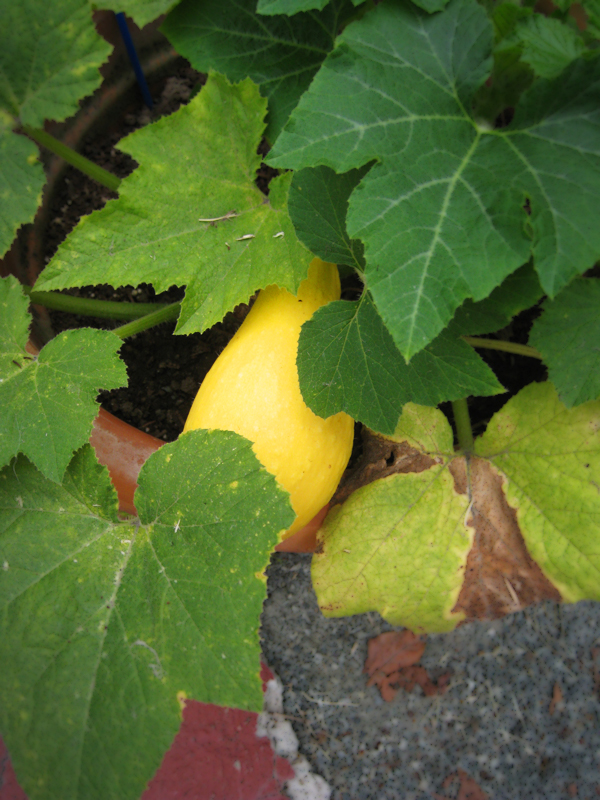 We also have straight squash in the pot. 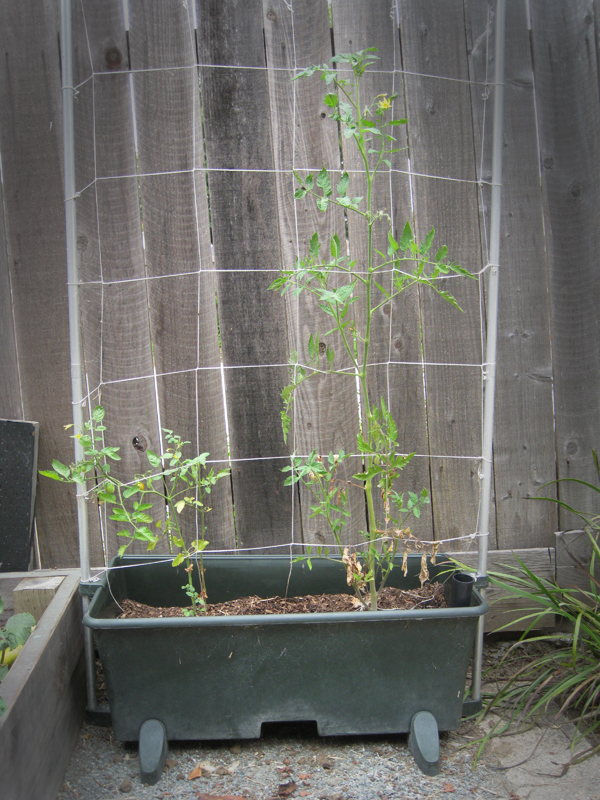 To the right of all that are tomatoes in the Earth Box. Can they look more pathetic? I can’t figure out what is wrong here. But they are producing and growing… 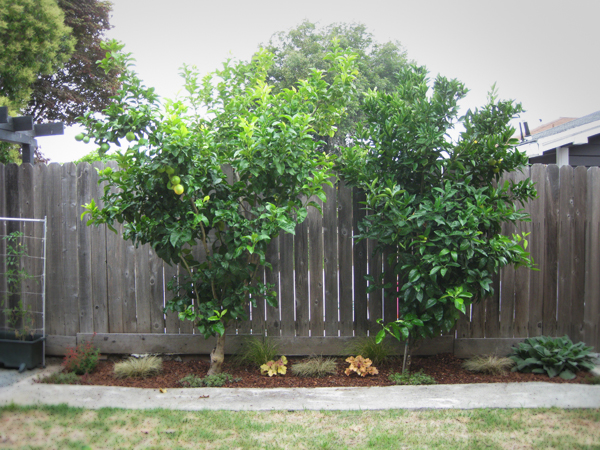 The right side of the yard is home to our two fruit trees, a lemon and an orange. Mike saved these trees when we first moved in. Both had huge suckers which rendered them freaks (i.e., football size lemons! huge spikes!) and he hacked them both down to less than 4′ tall. It’s quite amazing really. The lemon recovered relatively quickly while the orange took a bit longer. But today, they both produce tons of fruit. The kind you can eat! 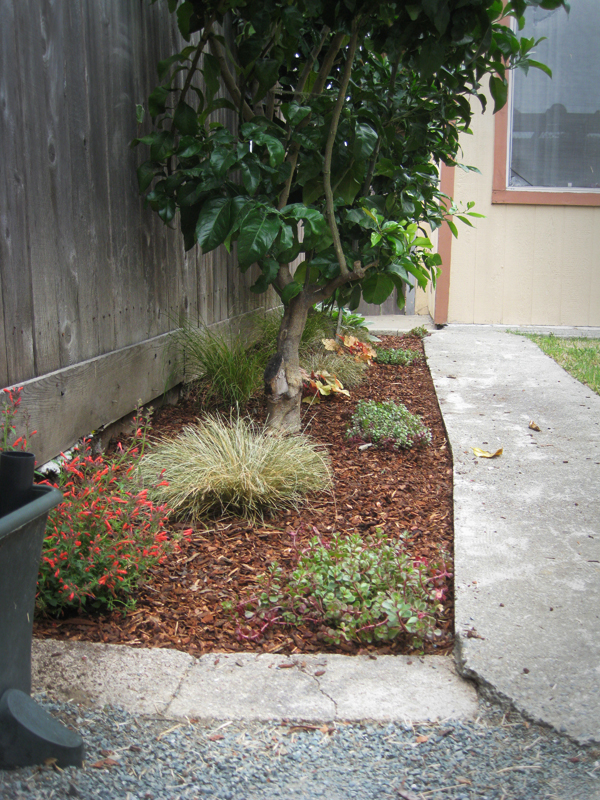 This part of the yard gets the most sun, although under the trees is a different story. I’ve been through a few rounds of plants down here and am thrilled with what I currently have going on. It’s a combo of native grasses, three in ‘Olive Oil’ and two a wonderful green with orange tips. It starts off with an Orange Nectar Agastache which I just recently planted for color and to attract humingbirds. The Dragon’s Blood, which I am using as a ground cover and border softener lines the front edges. At the far end is a Lamb’s Ear, a plant I’ve always wanted. It’s growing really well but fighting a dusty white mildew. Growl. 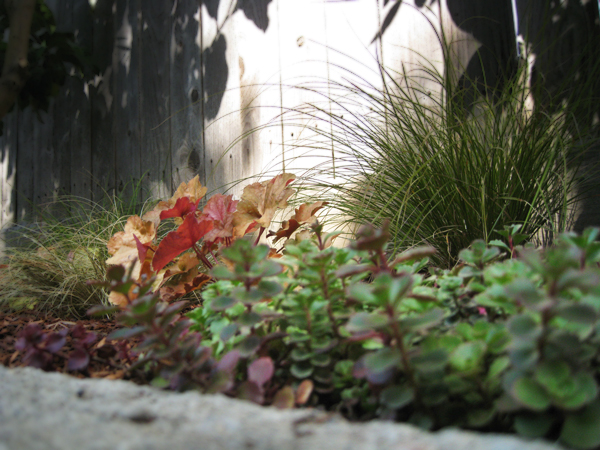 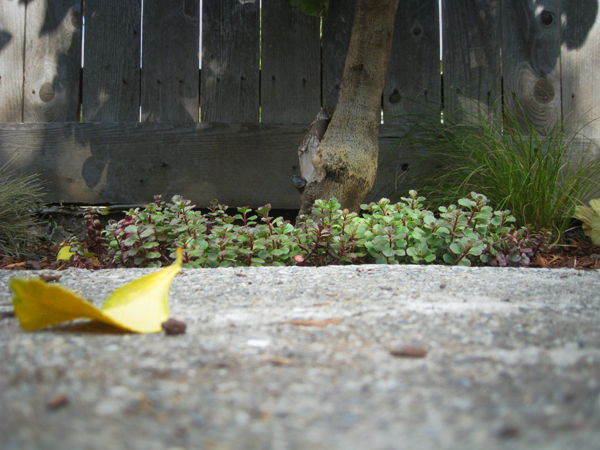 And lastly, as you come full circle, you are faced with this: 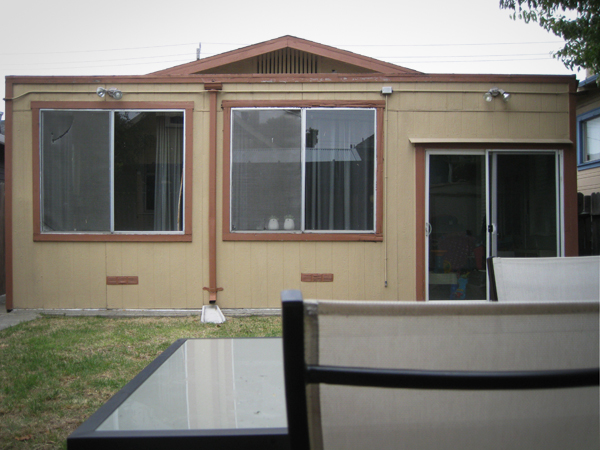 Ah yes, the sunroom. A sad and frustrating little reminder of all the projects that are not yet complete on this 1922 bungalow. Ripped screens are the least of my problems here.

But if I get up early enough, before my toddler and before my emails, I can sneak out in my pjs, with a cup of coffee and just maybe spot little creatures and moments like this, in the heart of the city: 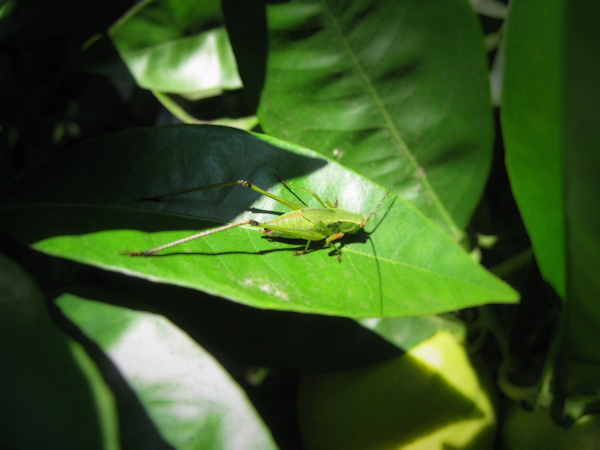 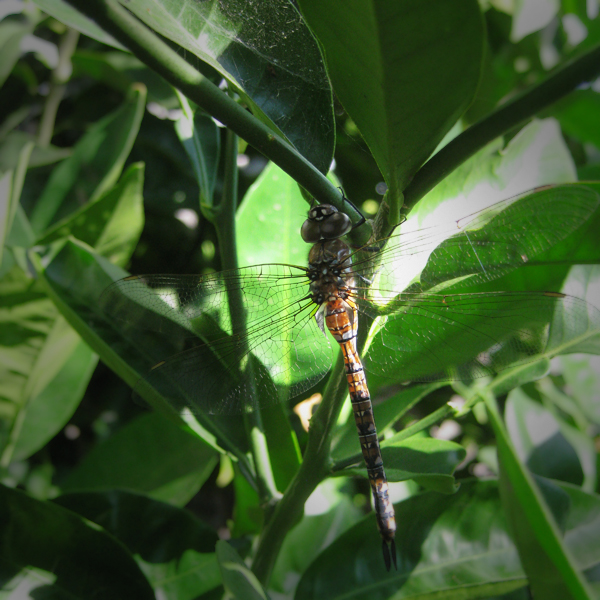 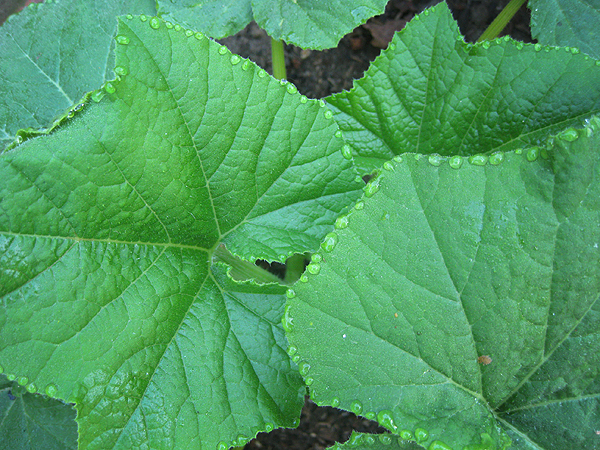 I love our backyard.

1 thought on “CATCHING UP » THE BACKYARD”