Holding out for Spring

This morning I am sitting in the car dealership getting some maintenance done on the Honda. I barely made it here on account of the SNOW STORM. We all realize it’s March, right? I mean, Minnesota is hard and I know what I signed up for. But what gives? Even seasoned locals are annoyed. 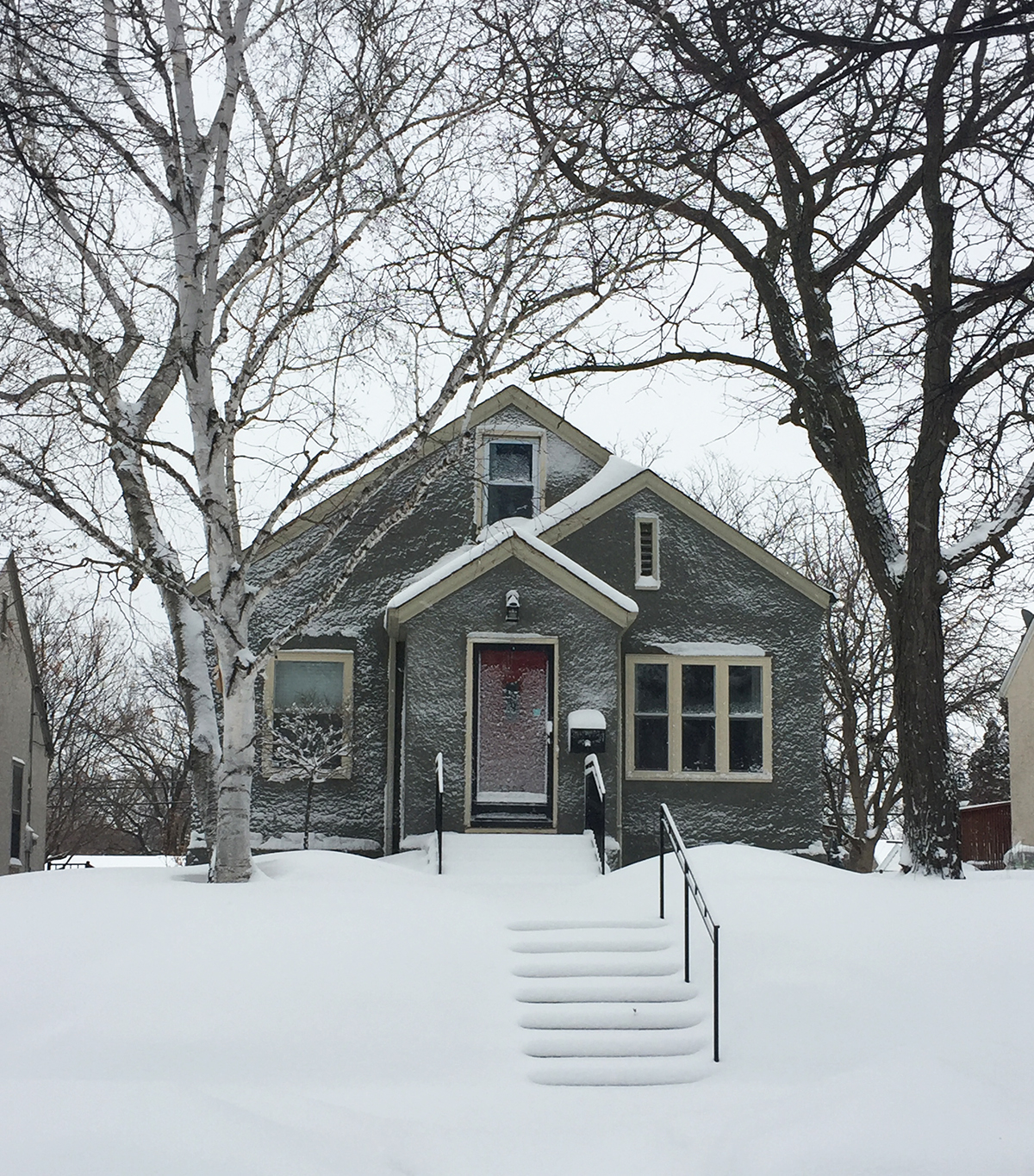 So as I sit here, wrapped in a scarf, wearing my Sorels and eating packaged donuts, my mind turns to spring. I have great expectations for this year’s gardening season. In the last two summers I have managed to do some large and laborious transformations to the front and back yards. It was a lot of grunt work and heavy lifting and this year promises more decorative transformations—new plants of my own choosing. I can’t wait!

I’m going to break this into a couple posts, starting with the backyard. Because as small as our lot may be, there is a lot going on! Let’s walk through the backyard as it was when we moved in.

The backyard is built into a hill going down towards the garage and small driveway that butts the alley. This was the view coming from the garage, up a few steps to the yard. The porch had a trellis along the front and it carried three different vines: A William Baffin climbing rose, a purple clematis and the third I didn’t bother to identify before ripping it out—it was overgrown, full of dead undergrowth and not particularly pretty. 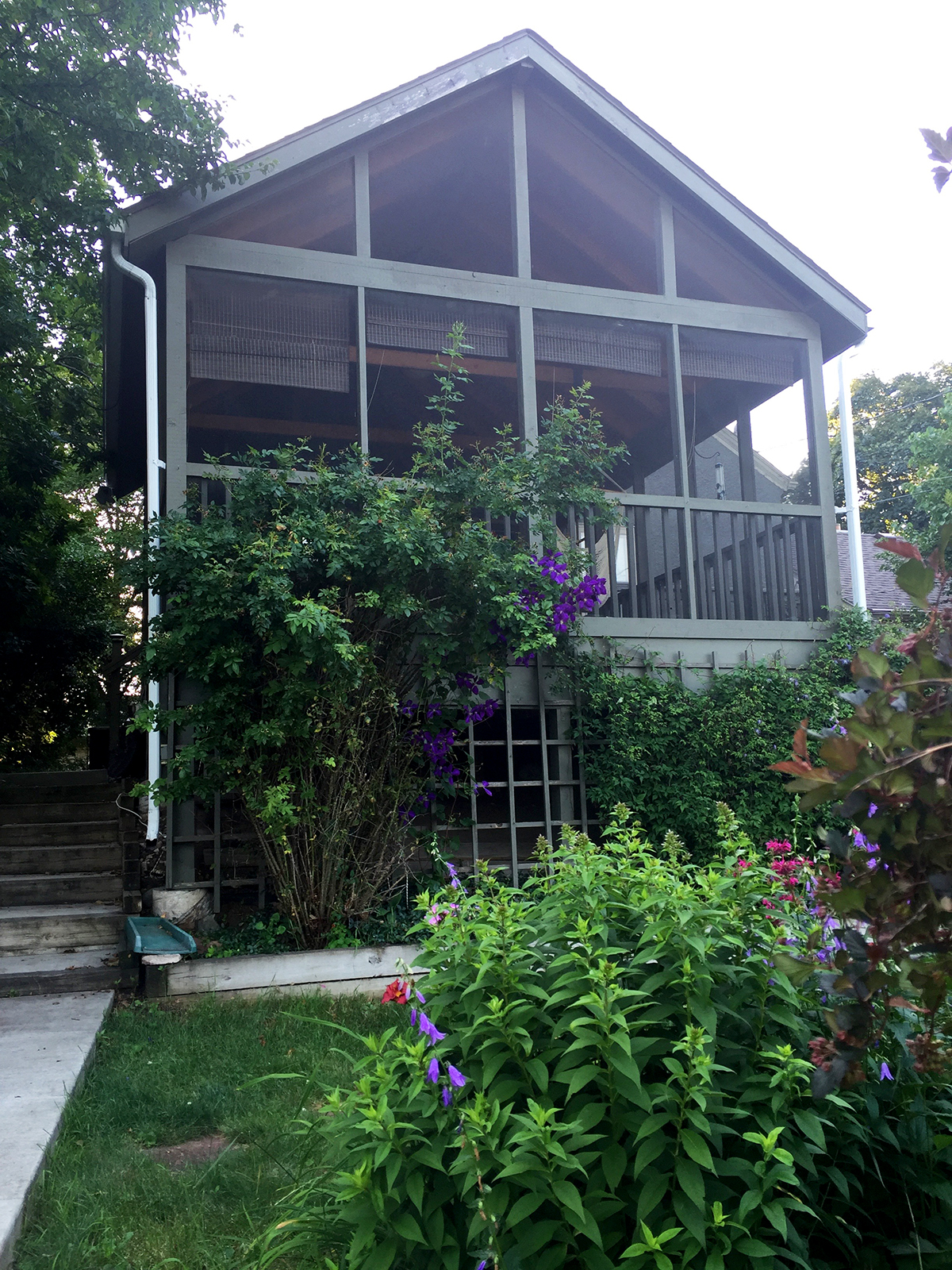 There was a small strip of grass that divided the porch planting box and a large amorphic planting bed bursting with flowers, wild and otherwise. It was all very cottage-like, which I am not unfortunately. 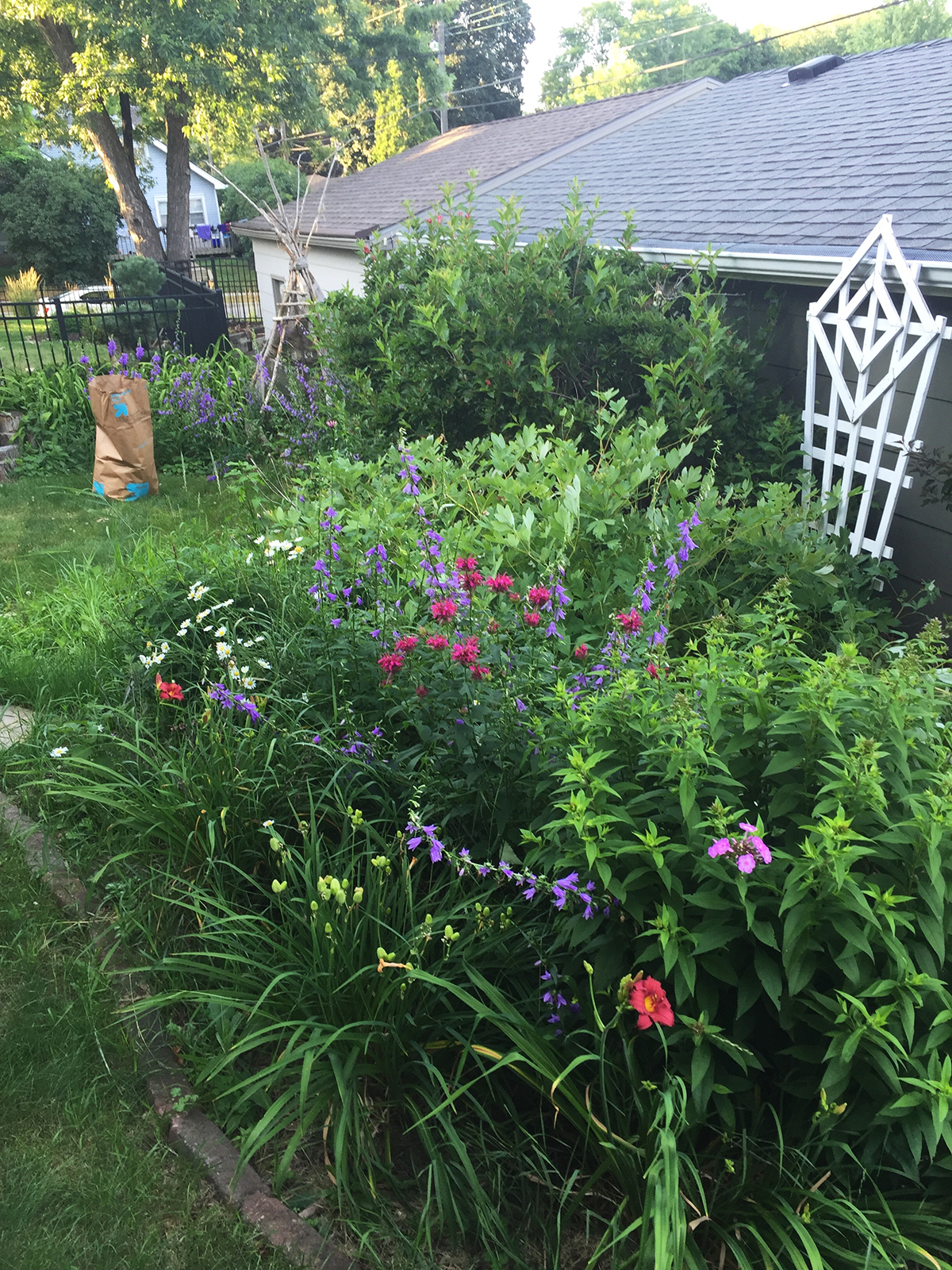 Side note: One of the myriad of things I like about Minneapolis is the neighbors. I have lived in cities my entire adult life and have never had such friendly neighbors. An example: we closed on our house in April but didn’t move in until June. From California, I sent my neighbor an email asking her for a recommendation to get the lawn mowed. Her response was no worries, her grandson was already doing it. What?? They also leave gifts for Thora on our porch whenever they hear it’s her birthday or some other holiday is going on. Beyond.

And when you work in your yard, you talk to your neighbors. If I’m in back, it’s those on either side. If I’m out front, it’s every passerby. You learn a lot about the street and it’s history, including the history of your own home and yard if you ask. And I ask.

We bought our house from a family with young kiddos. They bought the house from a retired couple. He had been a pastor and she, you guessed it, an avid gardener. And boy, it shows! The landscaping we inherited was obviously well loved but not designed for kids. I imagine it’s meandering growth was lovingly created with the intent for relaxing, sipping ice tea, making clippings. There was this woman, in a little sunhat, puttering around planting and weeding. And this was all fine and well for them. But us, we need a place to play! I am too busy to be out there all day every day, rotating a seasonal yard. Flowers are great for a hot minute, then they die and leave behind a mess that you have to clear out for the fall garden that’s starting to bloom and yadda yadda yadda, too much for me. I like grass and my gardening taste leans more modern than cottage, which means more hedges and less flowers. Changes had to be made.

I’m sure the neighbors had a thought or two as they saw me, what may have looked like, decimating this woman’s hard work.

Adding to that cottage charm, stepping stones. Red ones to boot. Very bad for my OCD. 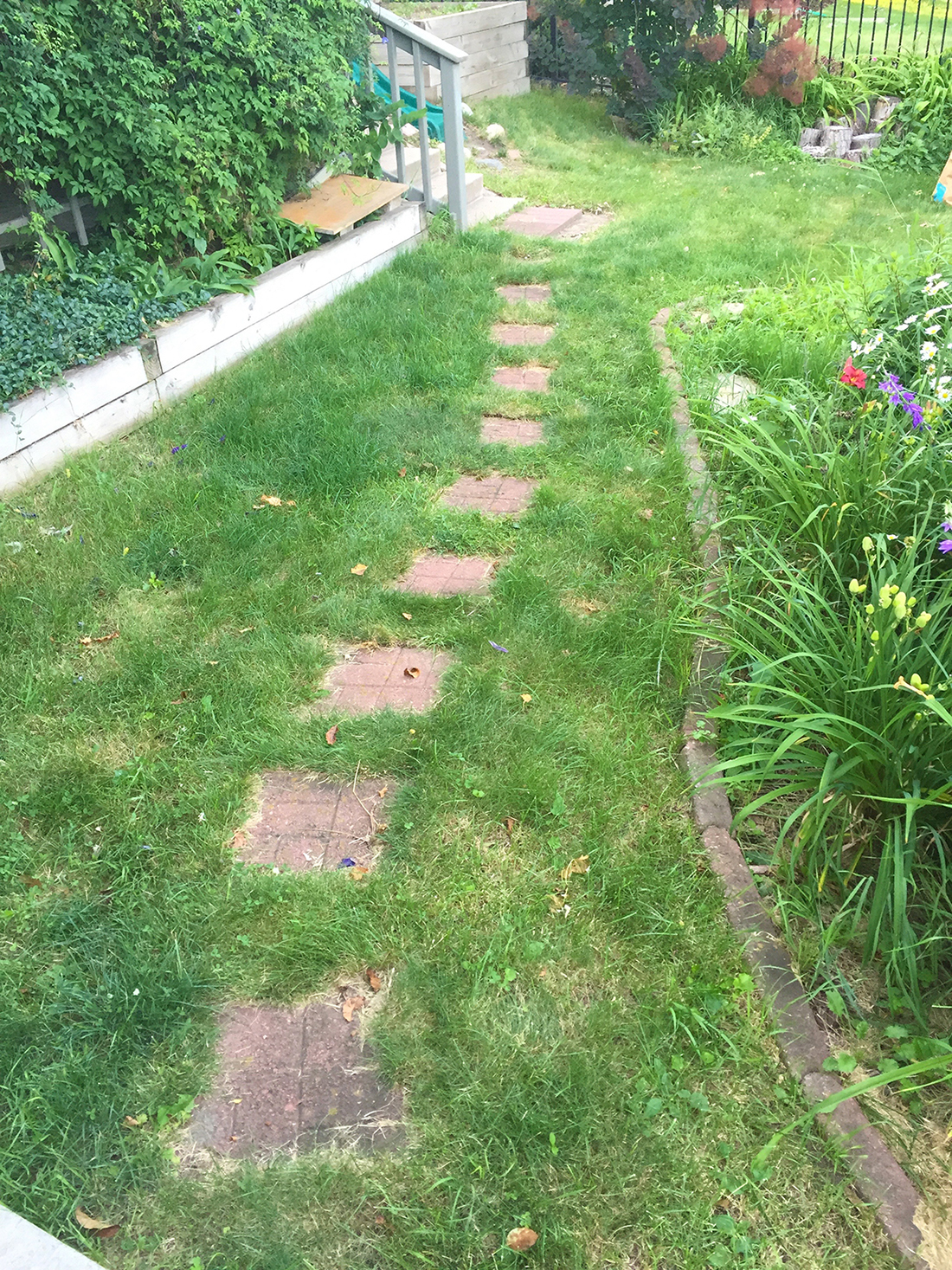 Follow the stones and find a surprise on the other side of the porch. That built in slide is too fun. That stays until Thora calls it “super lame,” then it goes. Those are certainly original stairs and I wasn’t too sure about the red pavers at the landing. The bottom of the slide was sketchy will those stones. And the railing was rotten, still is. At the top is the grill porch, one of 4 Summer Wine Ninebark shrubs and the beginning of a very long row of Hostas that ran the length of the house. 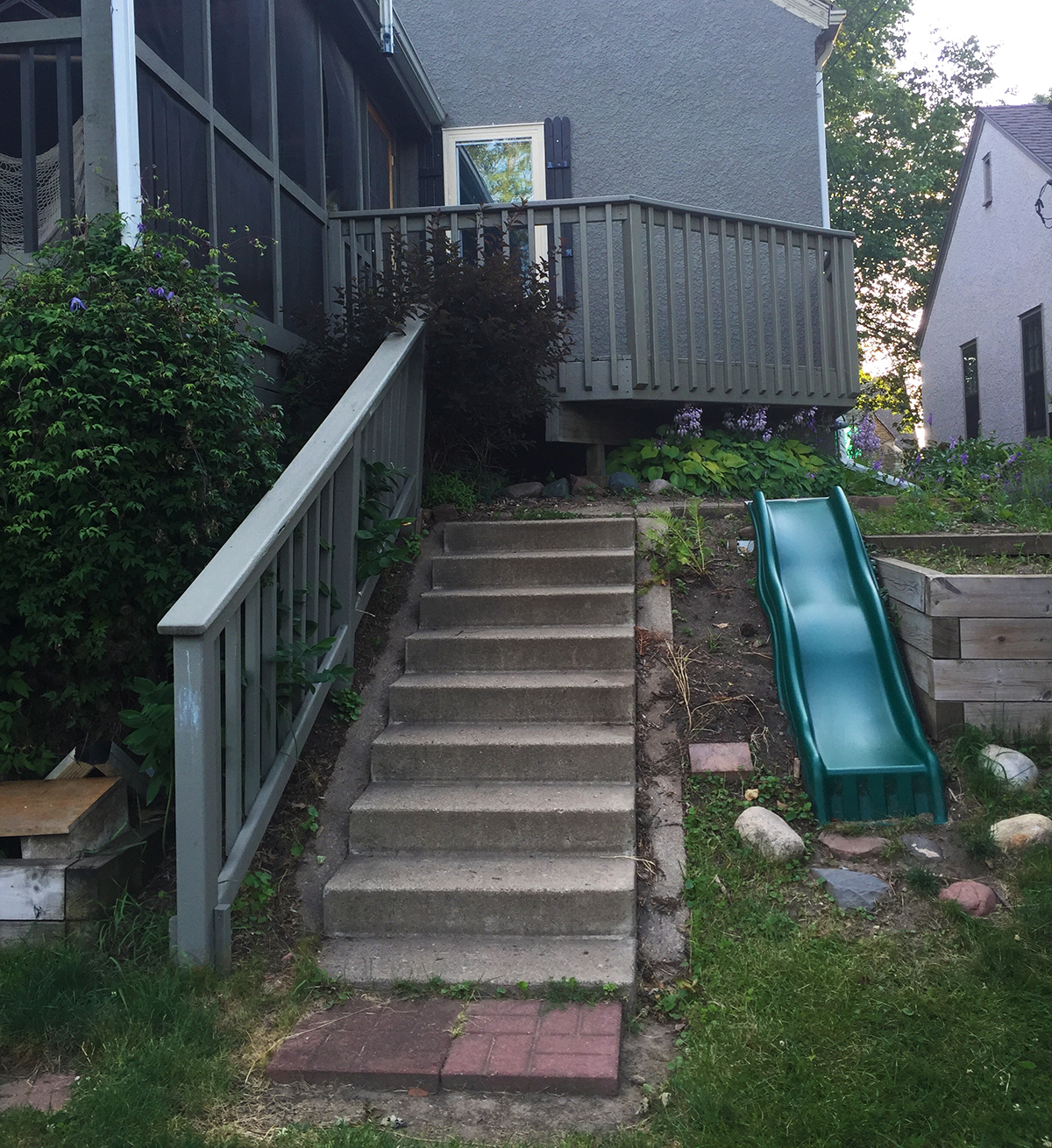 Beyond the slide is a raised bed that we just knew we’d use for veggie gardening. Then a beautiful Smoke Tree, which is proving problematic and I’ll tell you all about that another time. 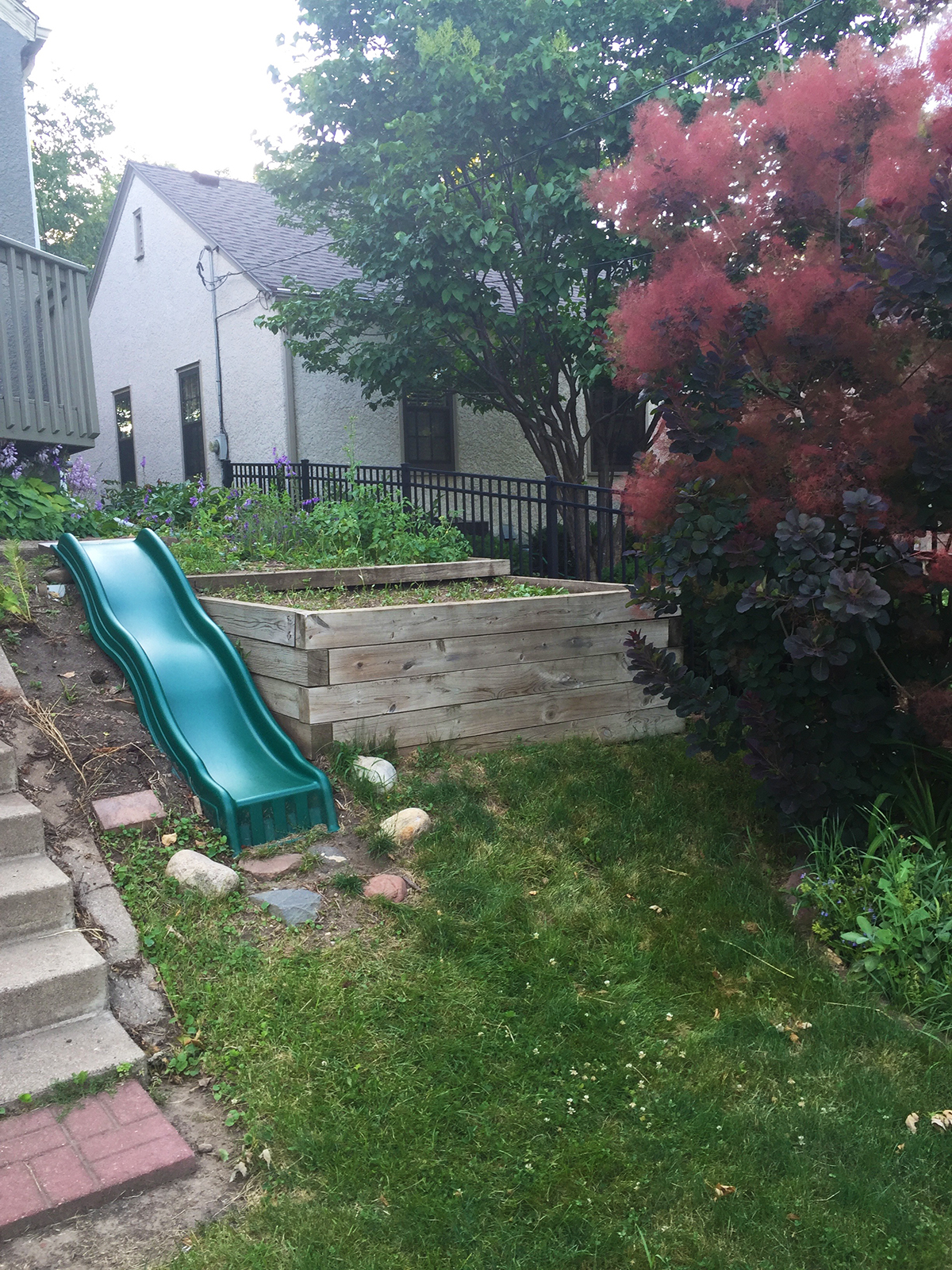 Turn to the right, past the Smoke Tree and you came upon this toadstool kingdom and Neverland teepee. Surely The Lost Boys were to blame. (Did I mention the previous owner had boys?) Initially we thought this looked all sorts of fun. In actuality, it was a spider city and everything was mostly rotten and we took it all out. I’ll bet this is a change our neighbors’ didn’t mind! 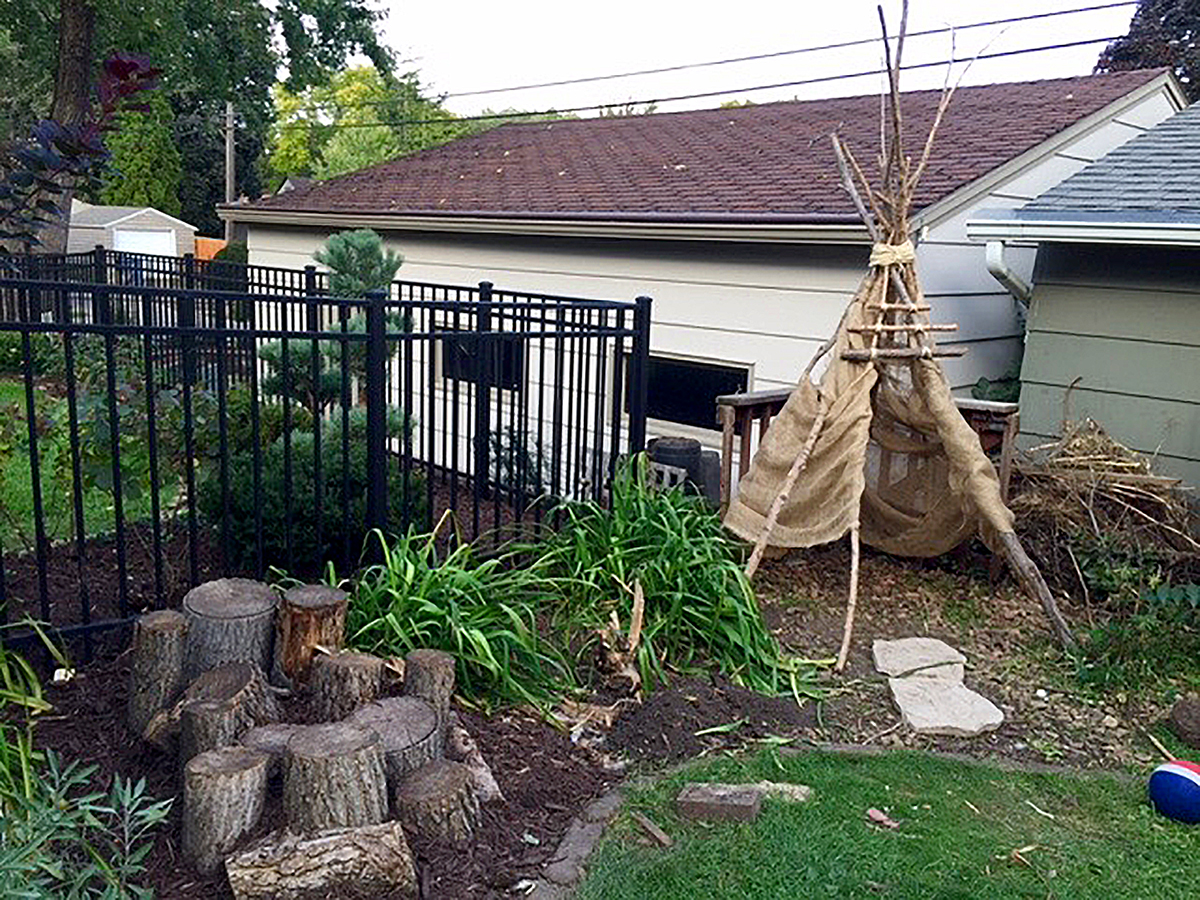 Here you can see just how much that planting bed jutted into the yard, and how overgrown it was. There are two Sonic Bloom Red Weigela up against the garage, flanking a window you can just barely see. 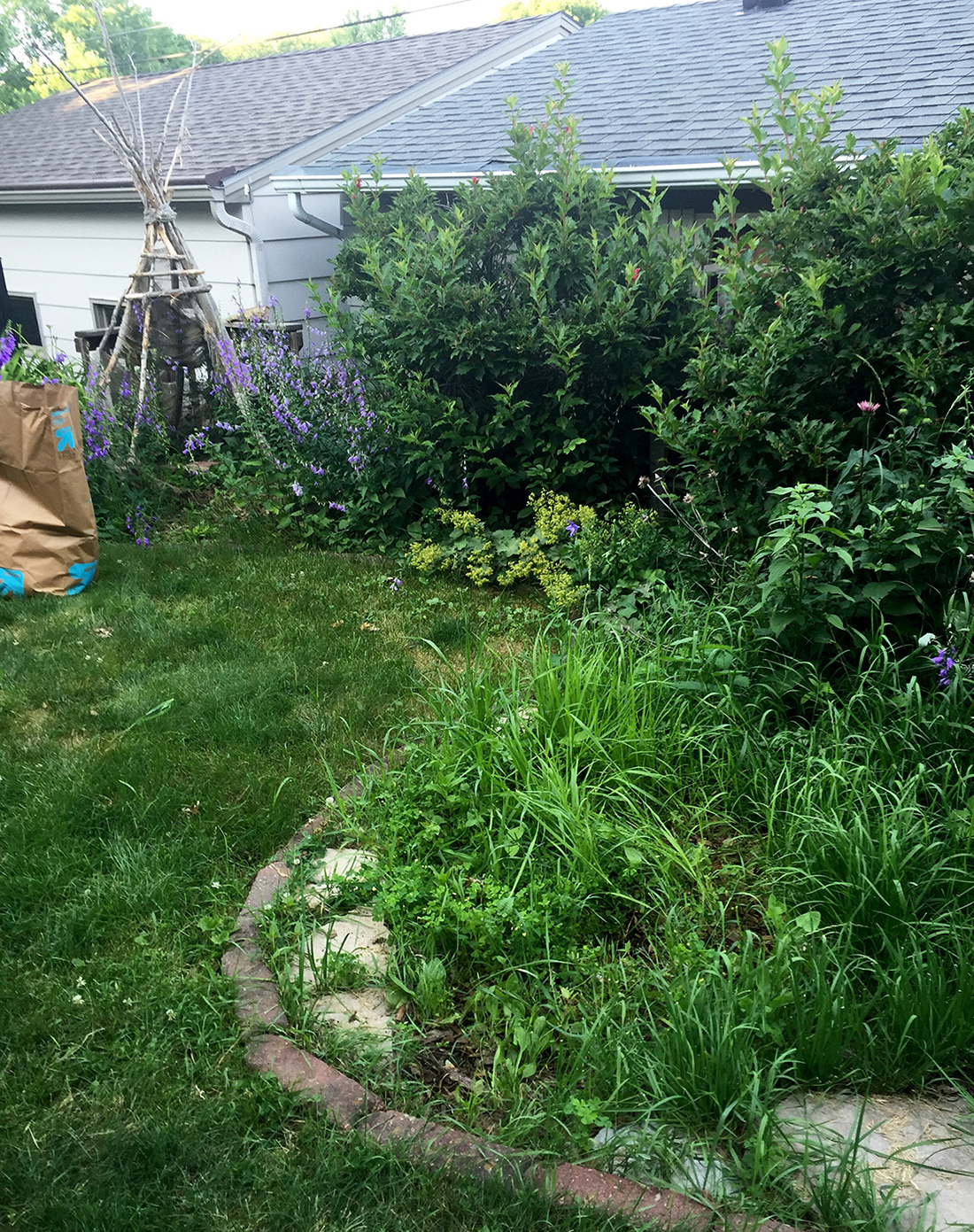 Here were my goals:

It started with weeding. I waded my way through the large planting bed in the middle knowing that whole thing needed to go. But that didn’t mean all of the plants had to go! I worked my way, plant by plant and relocated anything that wasn’t a weed. There were small red Daylilies, Phlox in purple, pink and white, Tiger Lilies, Lady’s Mantle, purple Coneflower and Bleeding Hearts. I found two enormous Bleeding Hearts that were at least 4′ in diameter. They must’ve been there so long! I clawed at that root system in attempt to remove those rotten plants. About a month later, one sweet little Bleeding Heart sprouted right in the middle of my yard. I transplanted it to the side of the garage and I can’t wait to see it come back this spring. Resilient!

Want to know what else is resilient? Chives. And they were everywhere and they all got dug out with a trowel, because, roots. Please, do yourself and everyone within a 50′ radius of you, DO NOT EVER PLANT CHIVES IN YOUR YARD. That is a container plant if there ever was one. Even in a pot, cut them before they go to seed.

If I wasn’t sure about a plant, I just relocated it. If I wasn’t moving a plant but wanted to keep it, it got a haircut. Those Weigelas, the Ninebarks… chop chop.

Then, I dug, dug and dug some more. I removed and stacked stepping stones and a massive amount of border pavers. There was a hidden tree stump we axed out. I created a new shape for the beds and gave us a nice rectangular piece of grass to kick a ball. 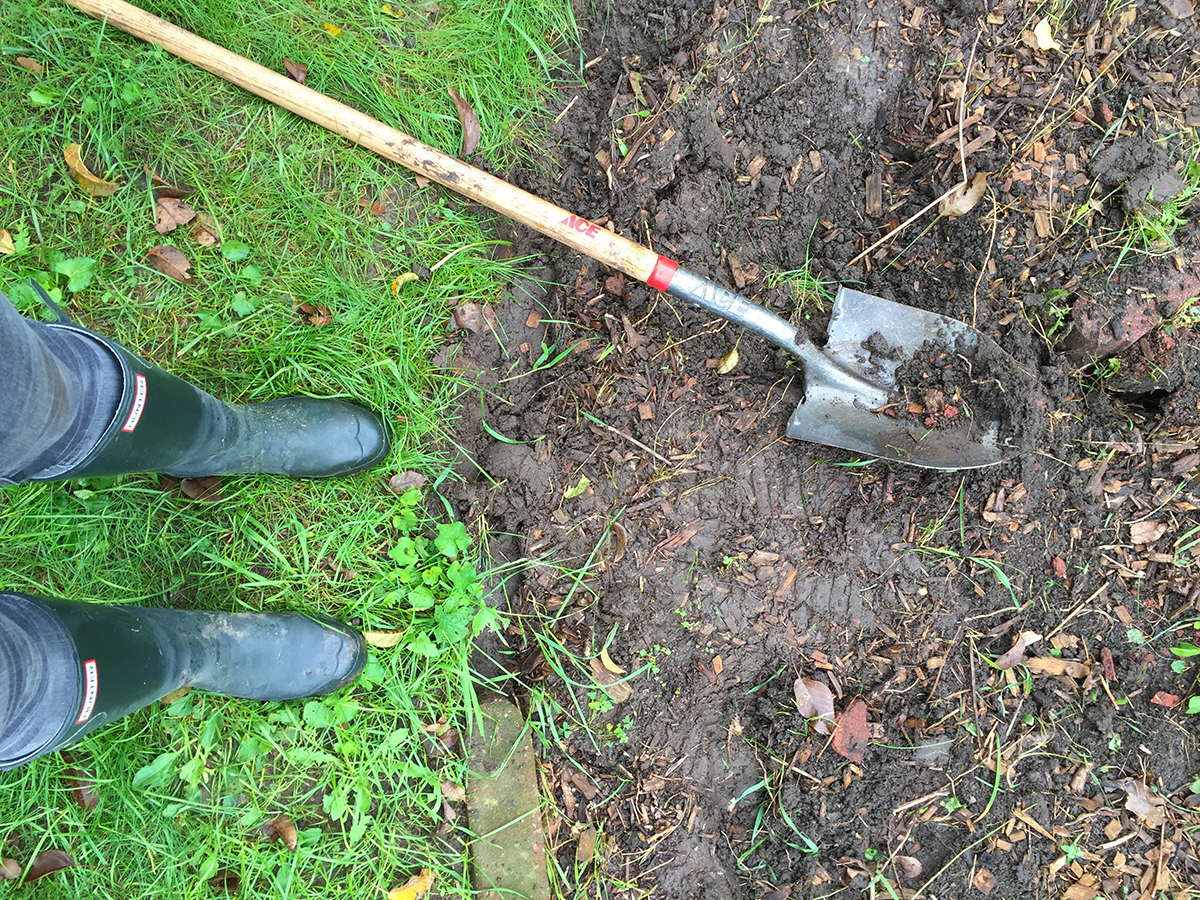 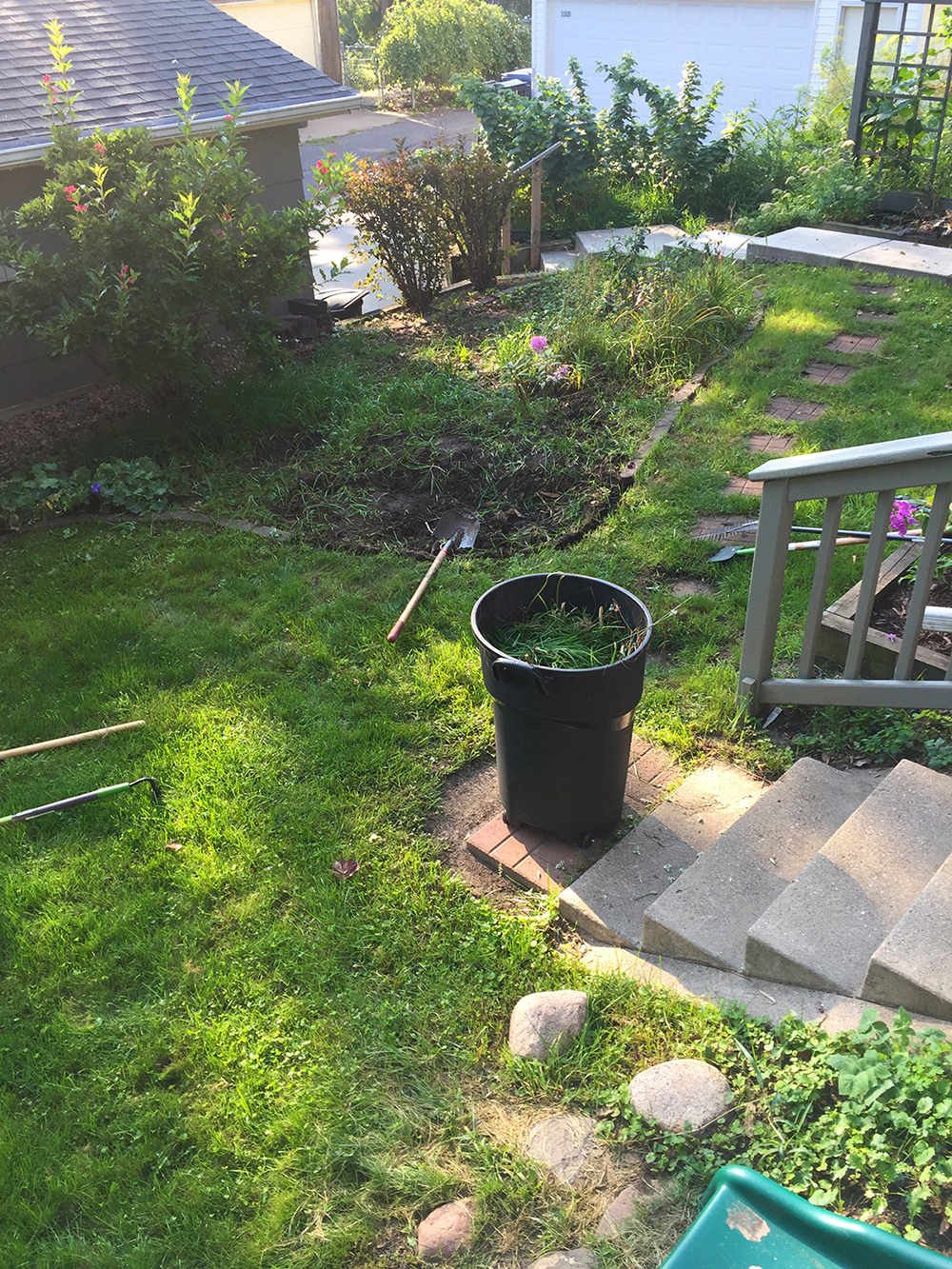 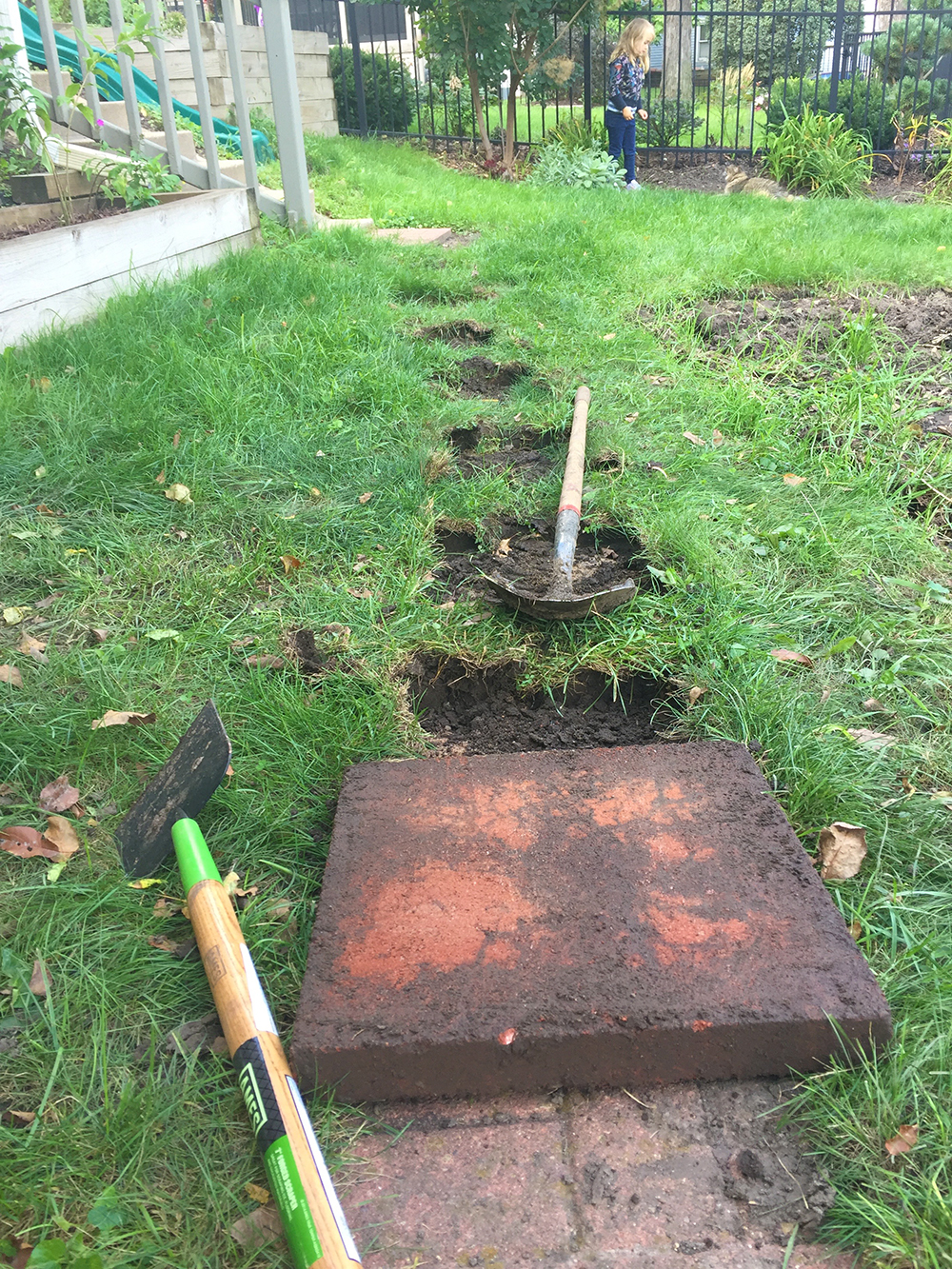 Eventually, I did my best to level what was left and prep for new grass seed. I amended the soil and raked in seed and held my breath. 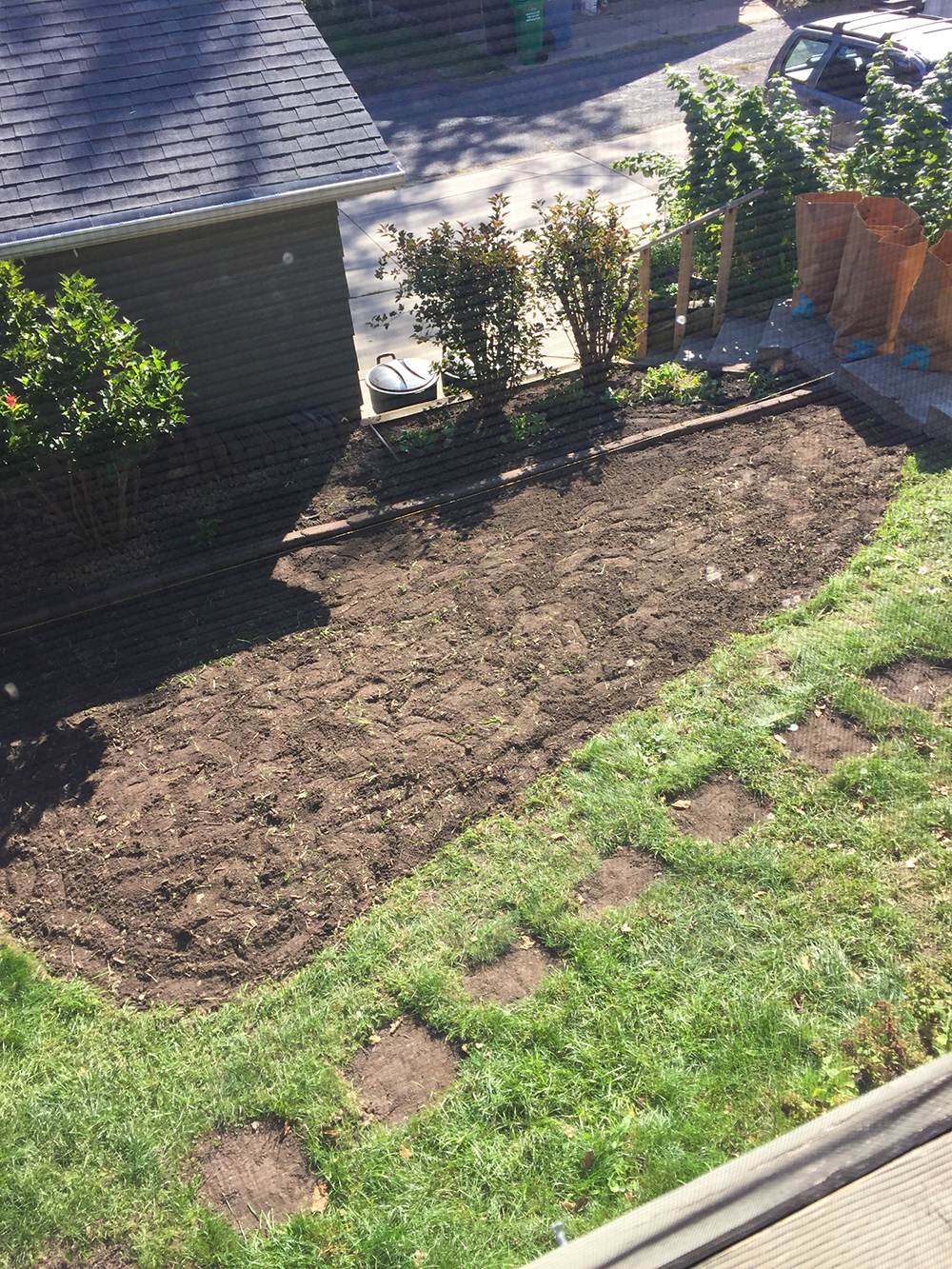 It didn’t take long before the fruits of my labor began to show. 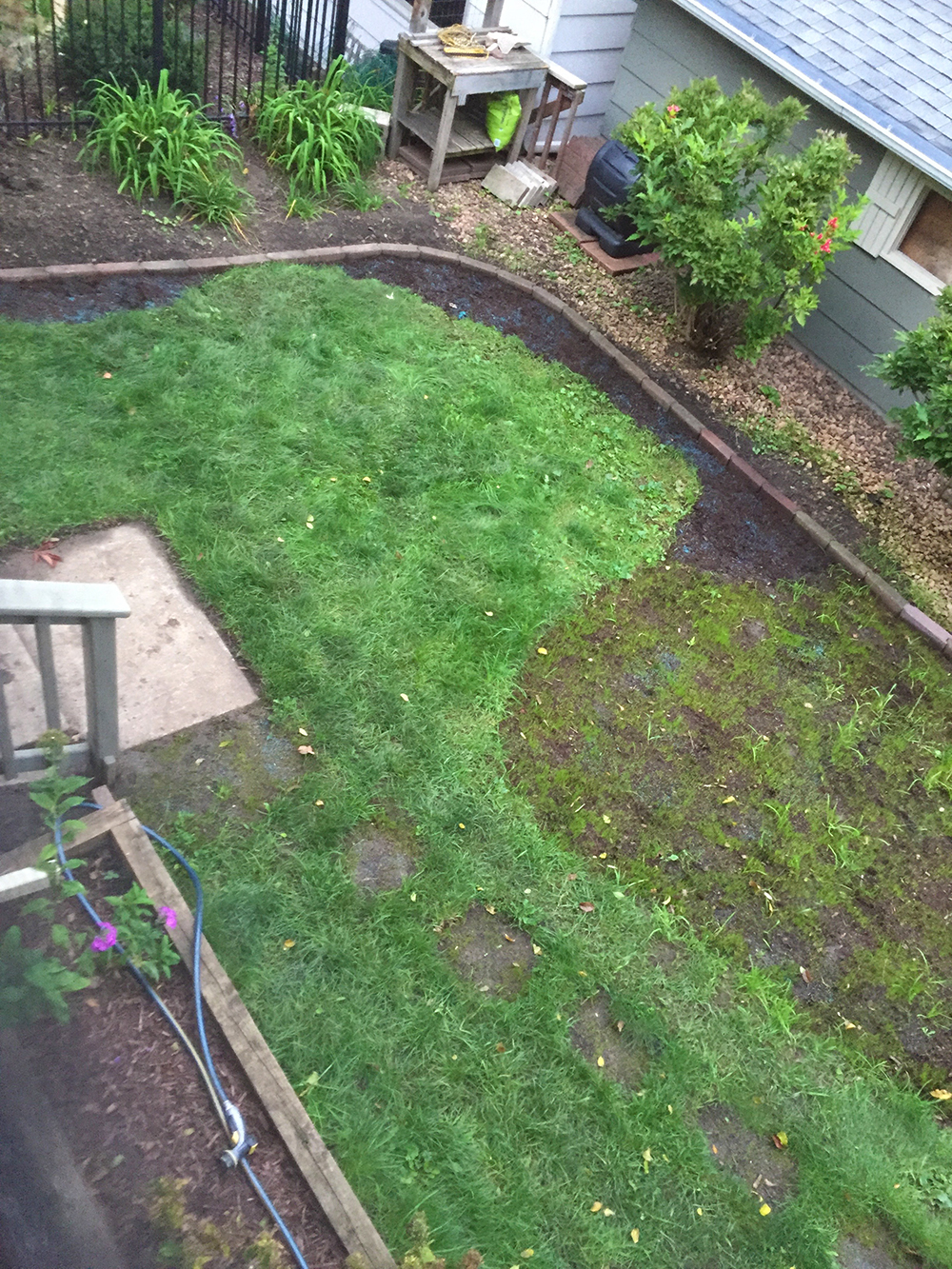 I also unearthed the original landing pad for the stairs. It’s sinking! I hope to raise it back up this year because it fills with mud at every rain. I added a simple paver at the bottom of the slide for feet to land.

The corner where the two garages meet is still a mess. I hope to plant a Juniper there this year! 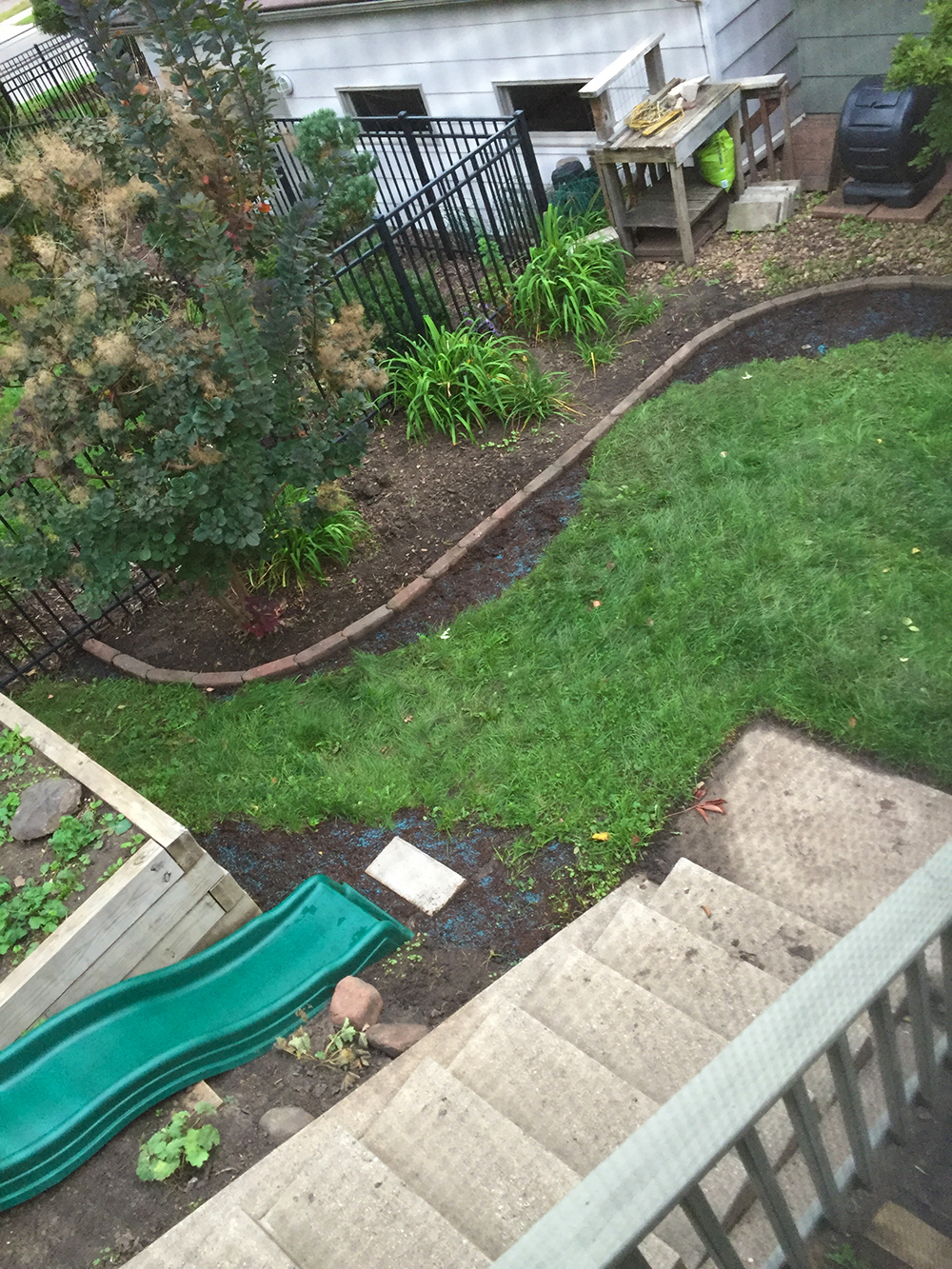 All of the Phlox I moved to the raised bed along the porch. That’s a temporary move as I have Dogwood dreams for that space now. The climbing rose was trimmed severely according to directions I found online and it responded beautifully. This year, I plan to move it to the trellis on the side. Like I said, Dogwood dreams. A planting strip was created along the slide using some of those Lady’s Mantle, Dead Nettle and the large stones. 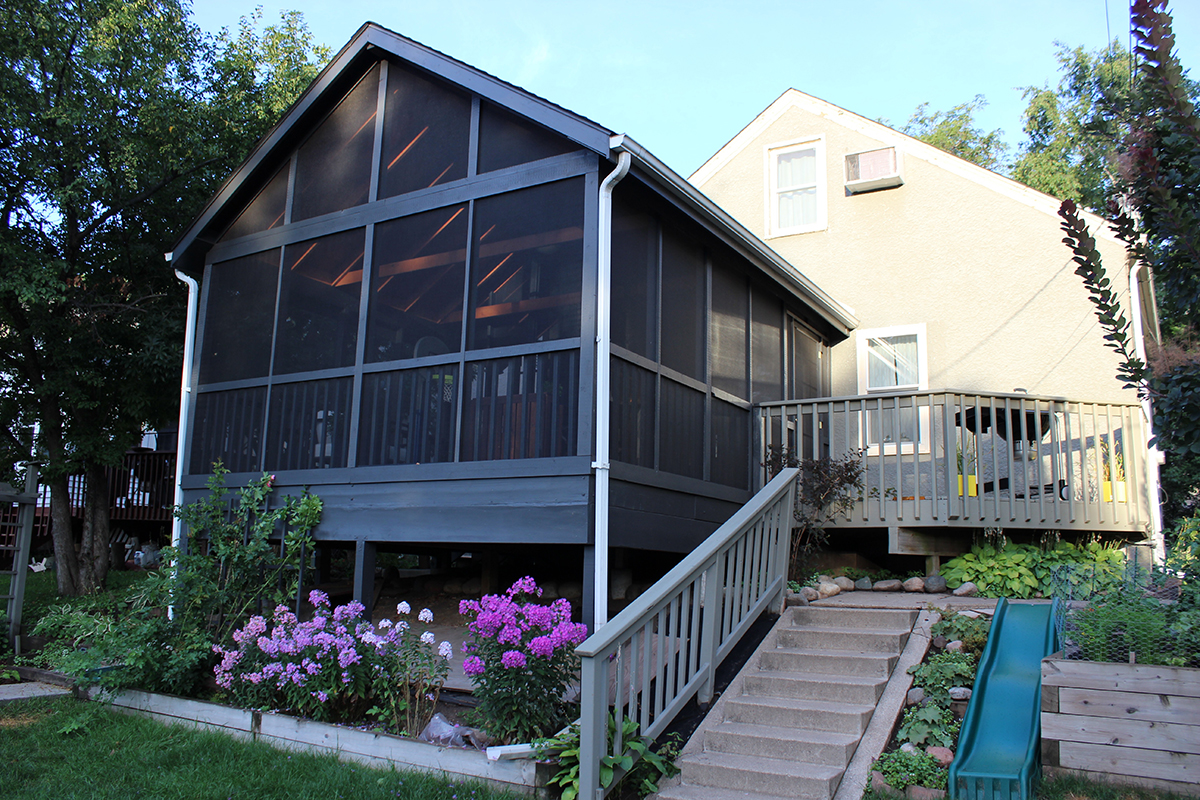 The veggie garden worked out great last year but bunnies were a problem. This is not the ideal solution and my mind is currently working up a more aesthetically pleasing bunny-fence. Speaking of, we have a bunny who lives under the slide. And we love it so sometimes we plant things just for him/her. 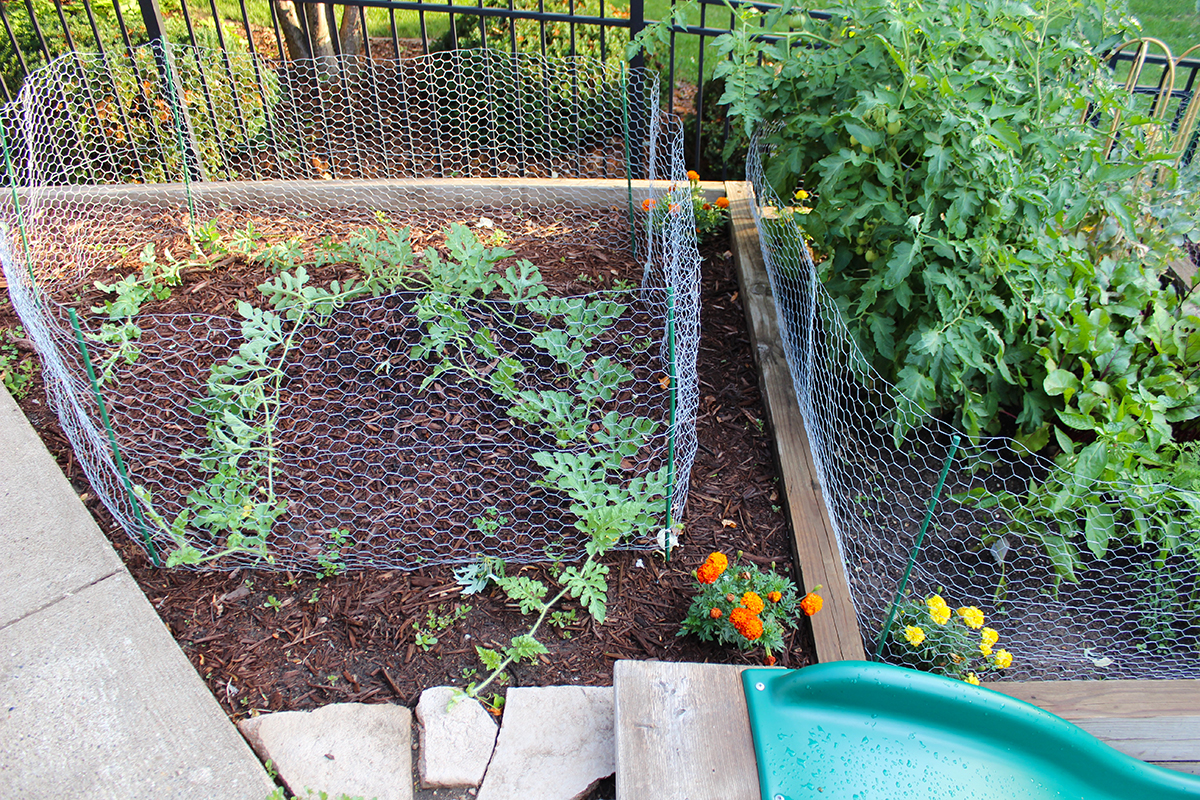 Here are the Weigela after probably their third time being trimmed. These babies are pretty rotten and I debate how much longer I will tolerate them. This spot is pretty barren though. My mind whirls with thoughts on how to fill it out. It’s shady and prone to moisture, bottom of the hill and all. We replaced the glass in that window but have yet to install it. BUT! See how much yard we have now?! 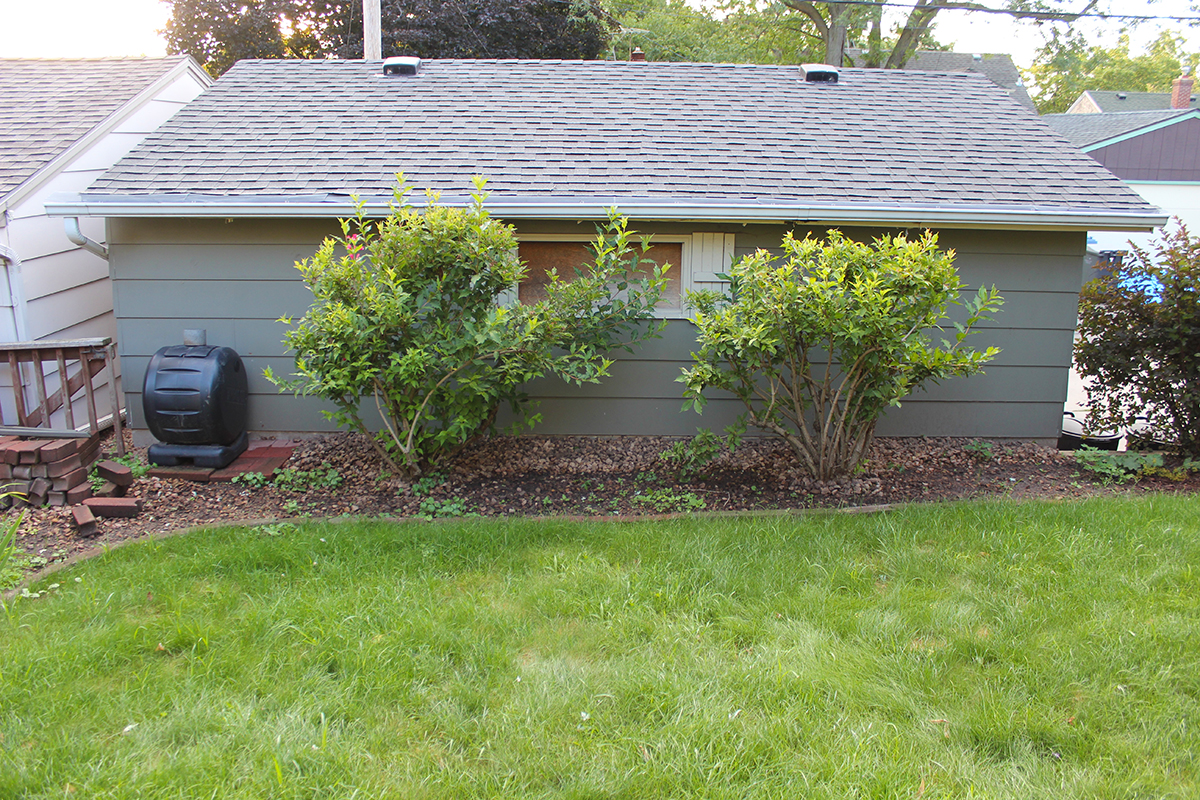 Here is the side trellis, that still needs to be painted, where I plan to move the rose if possible. I divided some very large Autumn Joy Sedum (it’s an older variety that requires rings to hold it up), purple Heuchera (Coral Bells), the Coneflower from the middle and Hostas from the front yard to make sense of this space. We also have large Allium bulbs in there waiting for spring. Can’t wait to show you! 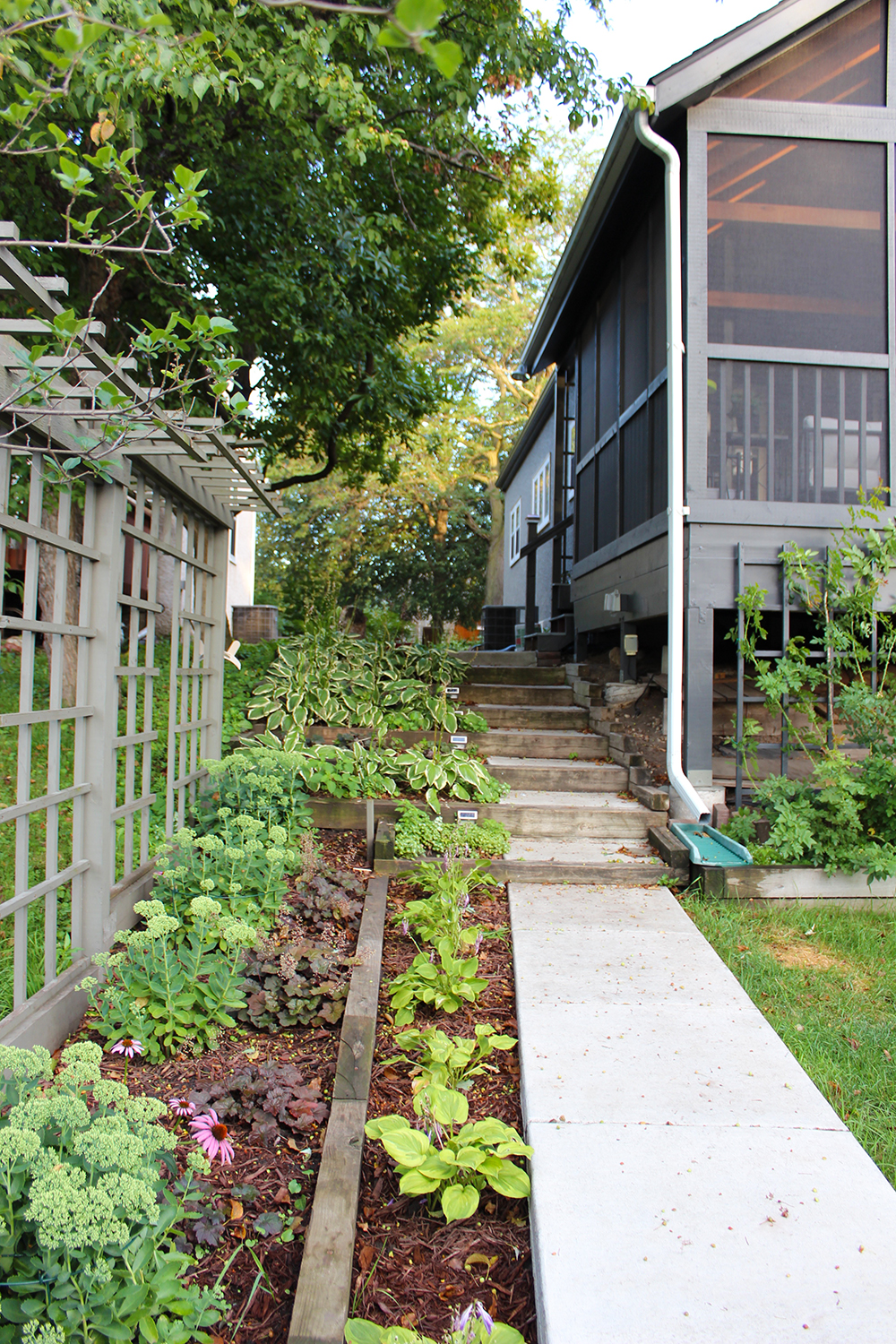 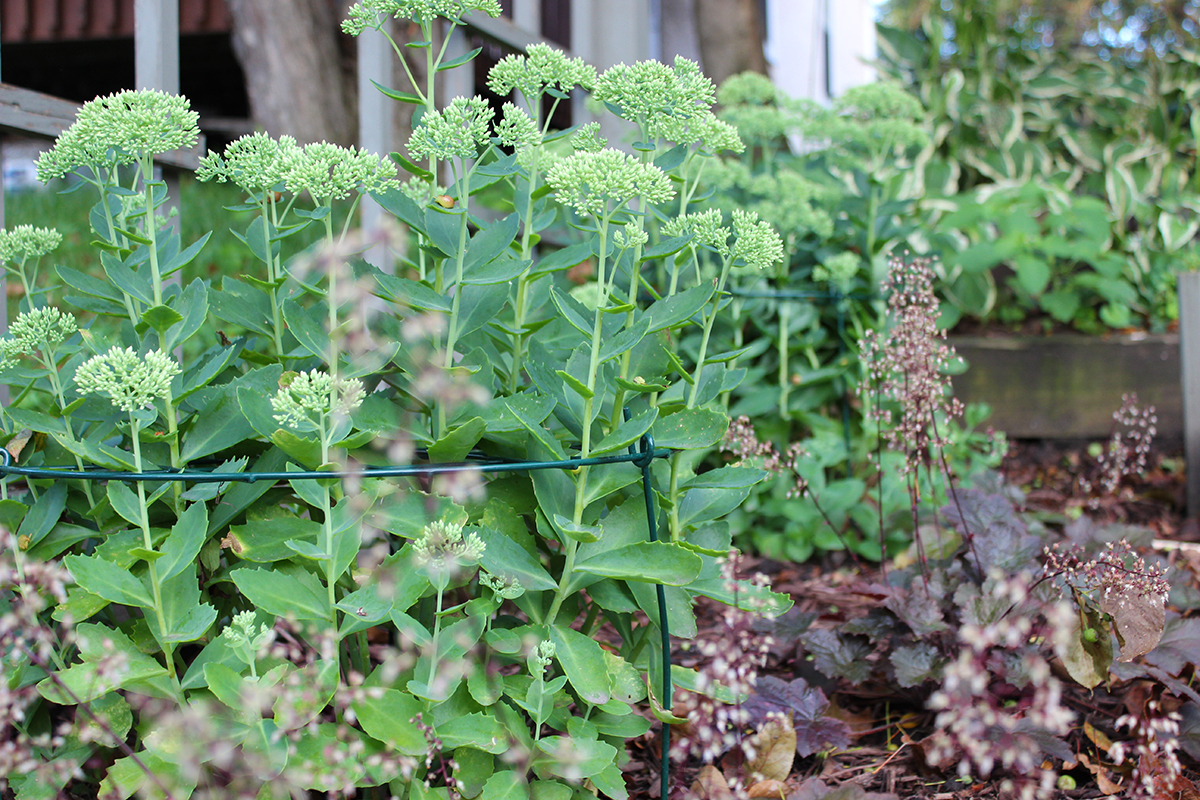 And at the top of those stairs, we recycled one of the tree stumps into a fairy garden. Thora loves this spot but won’t let her fairy sleep out here. She would be too lonely I hear. 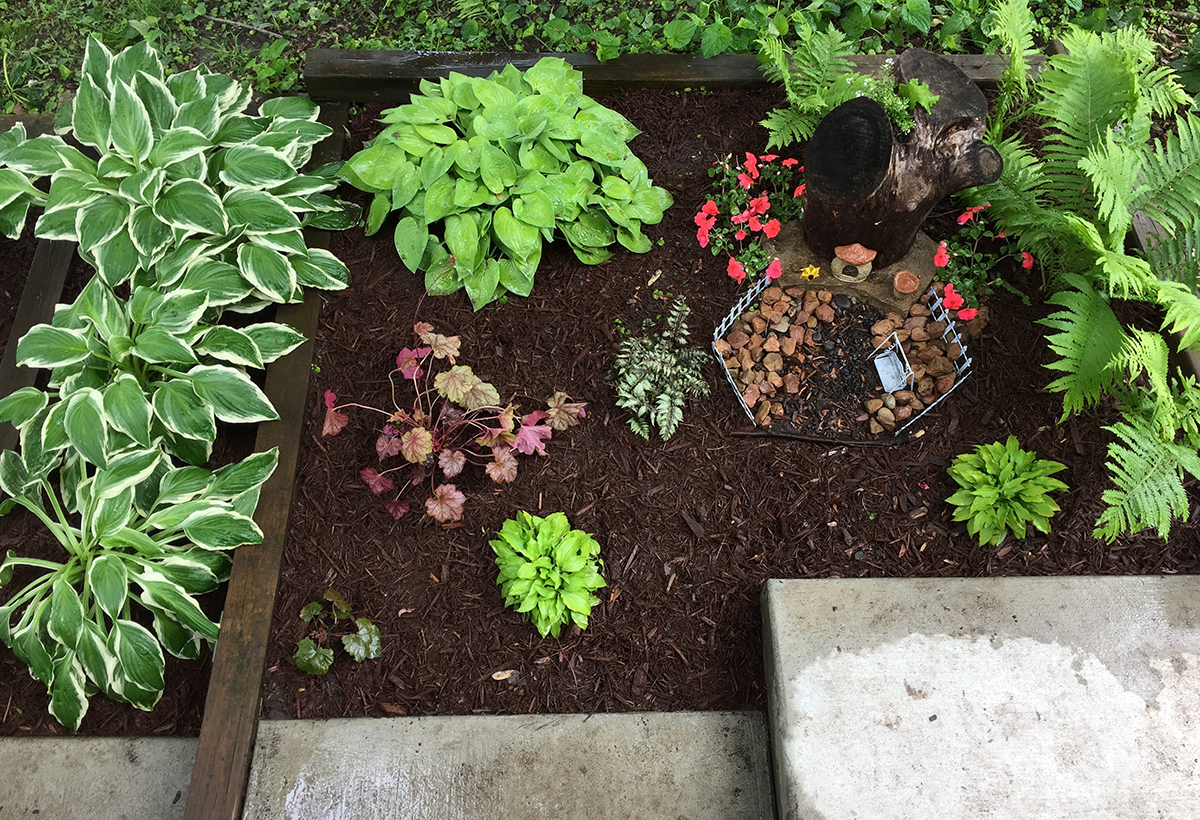 I love the backyard so much. And although I still have some big projects to do back there, I feel like now I have a handle on what’s there and where I want to take it. Hey snow, it’s time to melt. Deal?

In the meantime, here is a shot of my neighbor’s cherry tree from last spring. Can’t wait! 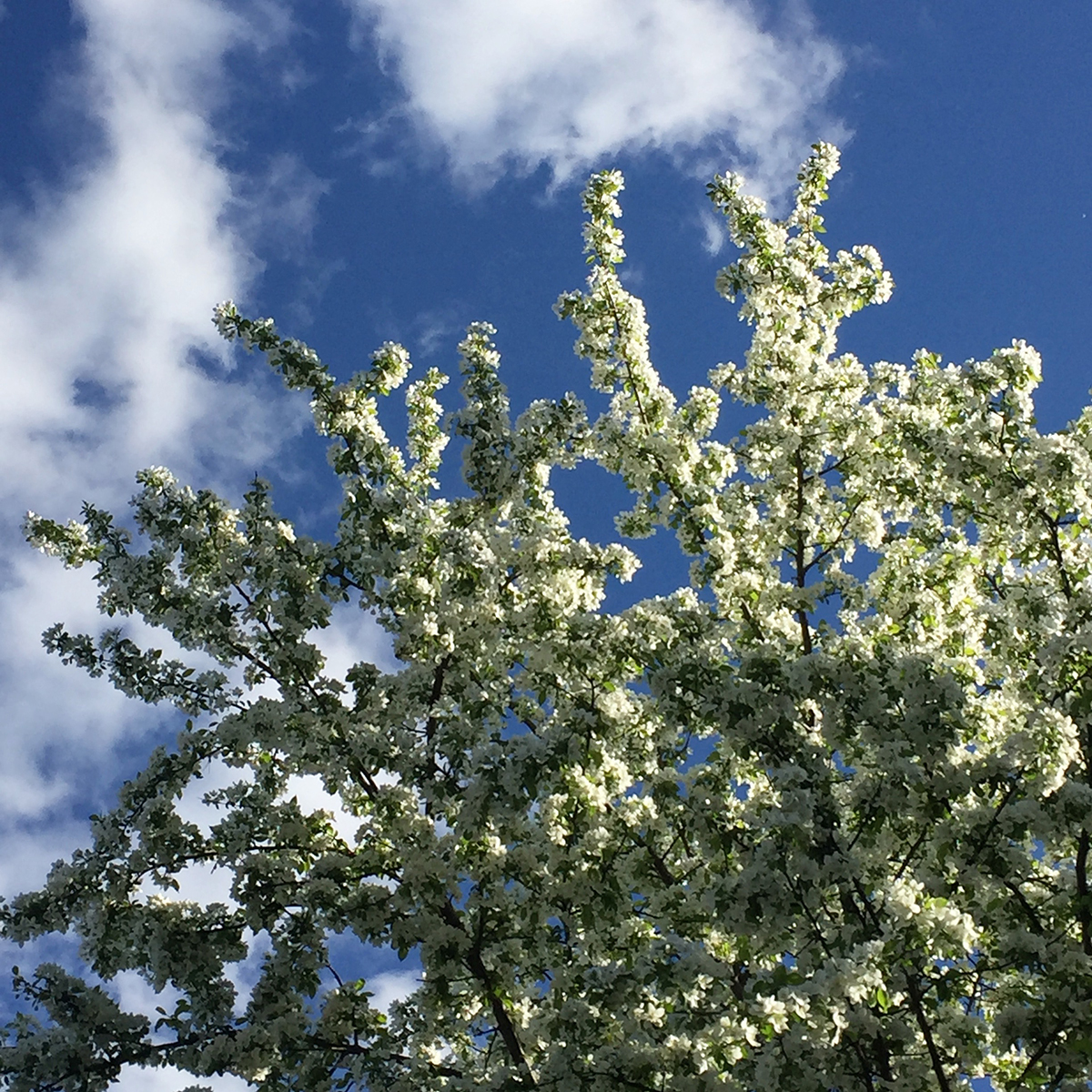